Windows Live Spaces is one of the major blogging platform which holds around 30 million active blogs. Microsoft recently partnered with the open-source WordPress CMS parent company Automattic to move all the blogs to WordPress.com. 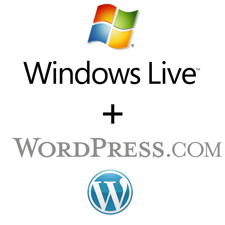 According to the plan, the Windows Live Spaces will gradually phase out to WordPress.com through a new migration utility that is already available. The complete transition will take up to six months, while the new users are already directed to WordPress interface. As part of this switching, support for Microsoft Connect is also added that will enable users to share updates to their wordpress blogs with friends by using Live Messenger.

“WordPress powers over 8.5% of the web, is used on over 26 million sites, and WordPress.com is seen by over 250 million people every month. Not only that, Automattic is a company filled with great people focused on improving blogging experiences. So rather than having Windows Live invest in a competing blogging service, we decided the best thing we could do for our customers was to give them a great blogging solution through WordPress.com.”

The shift will add millions of new blogs to the already 14 million that exist at WordPress.com giving it an ever larger chunk of the total web because of which it is being termed as one of the largest transitions on the web.