The world’s easiest method to jailbreak your iPad, iPhone and iPod Touch, JailbreakMe 3.0 by comex has been released that untethered jailbreaks your device running the latest iOS 4.3.3. The new tool makes use of the PDF exploit in the Apple OS to work by simple running through a webpage in the Safari browser to install Cydia. The step-by-step guide is given below. 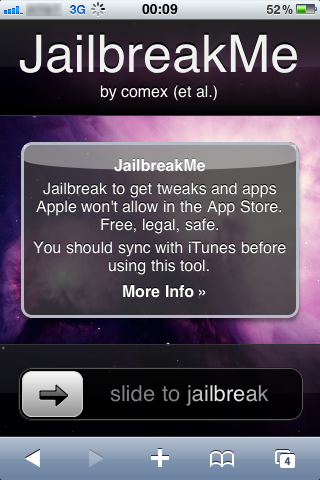 The is by far the easiest method developed to jailbreak an iOS device directly from the Wi-Fi without the need of connecting your device to a computer, thanks for the PDF exploit. Secondly, it avoids accidental pitfalls such as unwillingly updated to an unsupported OS or selecting wrong options from the new.

However it is expected that a new iOS update is on its way that will block this exploit forever making this process useless. Hence it is recommended to update to 4.3.3 to jailbreak your device as soon as possible.