Samsung has revealed a low end Android handset for the consumer market named Galaxy Pro. The smartphone comes with Android based OS and features a full-Qwerty keyboard besides the basic requirements of a user. However there is no match with the Samsung Galaxy S series devices. 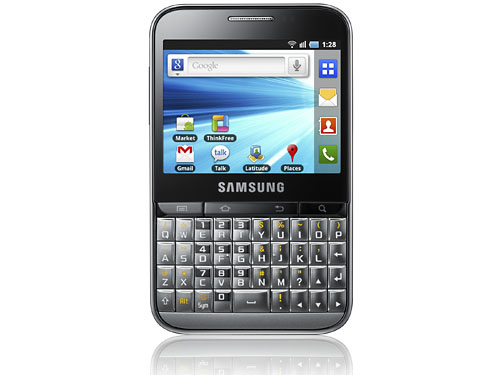 The device features 800MHz processor, a 2.8-inch capacitive touchscreen display and runs Google Android 2.2 Froyo OS. It supports HSDPS connectivity, comes with a 3.0MP camera and Samsung Hub Compatibility. The device is targeted at entry-level enterprise market due to the bold looking matches the likes on BlackBerry handsets.

The most interesting feature is the support for Personal Hotspot which will enable users to connect other Wi-Fi devices to this handset in order to use the 3G internet. This could come in handy if you carry portables such as laptops or tablets along with your phone and wish to stay connected on the move.

The details regarding the exact release date and pricing are yet to be revealed officially, so we’re keeping fingers crossed for now.