After 4 years of building upon the first portal game, creators Value have managed to step up and improve every single aspect of the first game which now seems like a small, insignificant prototype.

Portal 1 introduced players to a completely different type of gameplay where players solved puzzles by firing portals into walls, ceilings, floors etc. with the ‘portal gun’ which brought them through another portal which had been placed by the player. The mix of FPS and Puzzle turned the game into an instant hit.

The main campaign takes place just after the first game and the villain of the last portal, GLaDOS is back even though she was thought be destroyed at the end of the first Portal. Players control the same protagonist of the first game, Chell. Players find themselves in a Statis Chamber which resembles a hotel room before being taken through the basic controls and main understanding of what portals are. Something happens and the player then awakes inside an overgrown,derelict building which soon turns out to be the testing facilities of the first Portal game. Players then play through the first few levels of the original levels. This undoubtedly makes you feel somewhat nostalgic if you have played the first Portal. 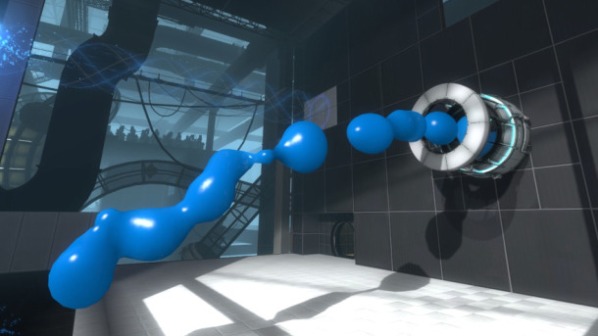 Further in you meet up with GLaDOS who is rather annoyed at being murdered in the last game. However she still respects Chell as a test subject and sentences her to be a test subject for the rest of her existence. This then leads onto the main portion of the game where players must seek out an escape from GLaDOS.

The gameplay in Portal 2 is relatively similar to that of Portal 1 however this time players have access to things like ‘Repulsion Gel’ which makes surfaces bouncy and ‘Propulsion Gel’ which makes surfaces slippery and gives players a speed boost when they run over it. Valve have also added things called ‘Excursion Tunnels’ which are beams that form a tunnel from one area to another and allow the player to fly through it. They have also slotted in things called ‘Refractor Cubes’ which can be placed to position lasers so that they shoot through portals or onto trigger switches. This makes completing puzzles much more unique with multiple ways to finish them. Having to combine all of these features to solve a puzzle can leave players feeling quite frustrated but it always feels rewarding when you complete one. It can also lead to things getting a little messy… 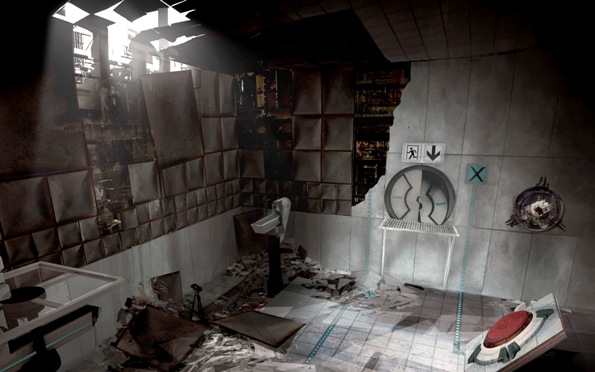 If you thought the Aperture testing facilities were pretty large in Portal 1 you are greatly mistaken. Instead of venturing through white testing areas, players are taken through a huge environment which contains underground sewers; past Aperture facilities and overgrown, jungle like, scrapyards. Valve seems to have followed suit of games like Crysis 2 and have stepped away from the dull monotone landscapes like we have been seeing in previous games.

Players can also go off and explore (to some extent) which gives the game a much more open environment than the confined white rooms of its predecessor. While wandering off players get some entertaining commentary from CEO of Aperture Laboratories, Cave Johnson, who is voiced by J.K. Simmons.

The unique, witty humor of Portal 1 has been kept alive in the sequel with a wide array of cast members including Steven Merchant, Ellen McLain and J.K. Simmons. Interactions between the player and characters help maintain the humor for which Portal is famous for.

The single player aspect of the game can be completed in about 9 – 13 hours however the new cooperative mode adds some replay value to the game but completion time of the cooperative which takes players through multiple test chambers which are designed to test teamwork and problem-solving will vary depending on how good you and your partner are.

None the less I somehow still see myself rarely going back to this game once I have played through it once. Even though the co-op feature provides some sort of replay value I will never be able to visualize the game as I did when I first played it. Going back to the game would just be to see how quick I could complete a level while leaving out all of the other stuff. And this is defiantly not how I want to remember this truly epic game.