The release date for next generation iPhone and iPod Touch is around the corner and the rumor mill is churning details about the upcoming devices. A fresh rumor from a Japanese blog Macotakara suggests that the next generation of iPod Touch will be announced this fall with a larger screen size, presumably 4-inch. 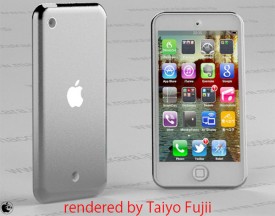 This news also coincides with the rumors that the iPhone 5 will feature a larger display as well. However the internals of this new iPod is believed to match iPhone 4S with Apple A5 processor, possibly an additional back camera and aluminium back case (liquid metal?) similar to that of the iPad. The pictures obtained of the new casing also shows a hole at the lower back of the cases, whose purpose is still not known.

However, given rumors circulating about an iPad mini, the gap between these hand held devices might shrink even further. We might have to wait sometime to let the details crystallize before commenting on the new market segmentation.