Microsoft Courier is less like a Tablet more of a Booklet

Rumors are all around about the Microsoft’s upcoming Courier tablet. Looks like Microsoft is coming up with something that can compete with the Apple’s ipad. The device is said to be in its final stage of development. Leak outs have shown that the device is less like a tablet and more of a booklet or a digital journal. Just like a traditional journal book you can organize your life and put down notes, drawings, pictures, videos or audio messages. 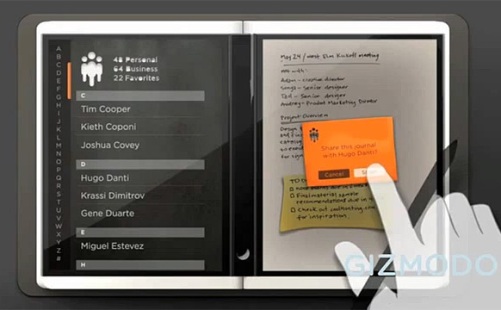 Courier interference is expected closer to the Zune HD. Microsoft has chosen NVIDIA Tegra 2 chipset, having low power consumption and capable of 3D and HD display. It has two screens and just like any booklet it folds. It is also said that the device will have inductive charging or the wireless transfer of energy where you don’t have to plug the charger in to the charging port. There is nothing official released by the Microsoft but the out side agencies have leaked out its concept and design. The device is expected to be released in the third or the fourth quarter this year.

Video and pictures from Gizmodo