With James Bond’s cinematic future in limbo thanks to the bankruptcy of MGM, Activision’s blockbuster license finds itself in an unusually strong position. Based on an original story by an actual Bond screenwriter, starring Daniel Craig and Judi Dench, Blood Stone is this year’s official Bond adventure by default.

Can video games fill the gap left by Hollywood’s flaky finances? Bizarre Creations has certainly gone all out to make it look that way. With globe-trotting locations, bombastic set pieces and a lavish credits sequence set to a new Bond theme song from Joss Stone and that bloke from Eurythmics, Blood Stone looks and sounds the part. Sadly, the game beneath the glamor isn’t quite as impressive. There are two main gameplay elements, shuffled together as the episodic plot requires. For the most part, it’s a third-person shooter with a halfhearted stealth flavor. You enter an area and try to remain hidden for as long as possible, picking off enemies with silenced headshots and melee takedowns. Once spotted, you’re able to fight back using, well, noisy headshots and melee takedowns. 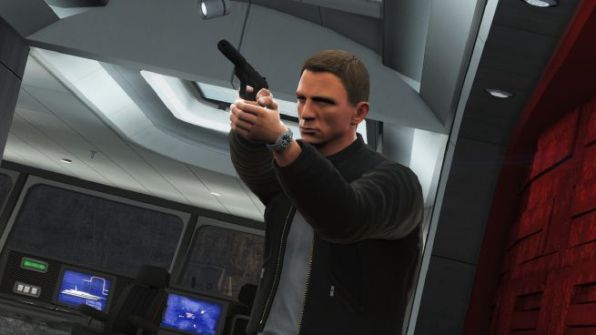 It’s functional and adequate, but this style of play has been run into the ground over the last five years or so, and Blood Stone has neither the depth nor polish to stand out from the crowd. Entering or leaving cover is an awkward, gluey affair, too heavy to cope with the demands of a room filled with AK-47-wielding henchmen. Strangely for a game which often foregrounds stealth play, there’s no crouch command. You can dash laterally from cover to nearby cover, but for all other movement, you’re painfully exposed. Once you’re out of cover, Bond can only stand tall and proud, strolling about like a peacock with a bullseye on his forehead.

Every hand-to-hand victory earns you a Focus Kill token, which can be used to trigger an obligatory slow-motion instant-death targeting mode, but it’s rarely required. Bad guys dip in and out of cover, shuffle backwards and forwards, and occasionally lob a feeble grenade but they ultimately prove no more troublesome than their famously disposable big-screen counterparts. It’s surprising how many you can polish off simply by hiding behind a doorway and battering them to death with a single button press as they obligingly walk up to you, one at a time.

The game is often confined to narrow corridors and small rooms, where only objects and features that are essential to progress can be interacted with. Occasionally you’ll get the chance to pick one of two paths leading to two objectives, but as both have to be completed, it’s an illusion of choice. Ditto for the sporadic areas where you’re able to attack from the left or right. It looks like you’re making a tactical decision, but there’s no real depth to the combat. Nor are there any anterooms to explore or alternate paths to try – you just keep moving forwards, admiring the scenery but rarely engaging with it. 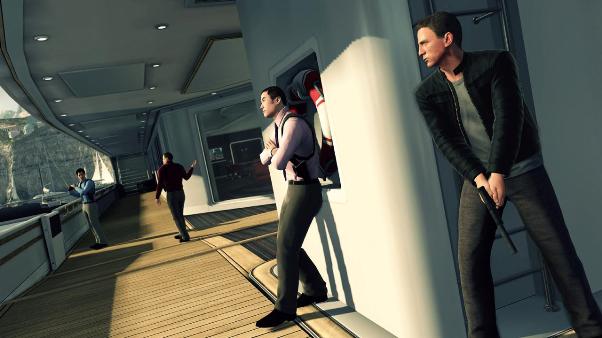 Any movement beyond the advance-and-shoot routine is scripted to a frustrating degree. If Bond can climb, grab or jump from something, then an on-screen prompt tells him to, and you press the button to trigger the animation. There’s no reason for this to happen unless that’s the way ahead, so you’re constantly being led by the nose rather than working things out for yourself.

One of the key factors in Bond’s appeal is that he’s cool under fire and always knows what to do. By reducing 007 to a rodent in a rat run with big signs saying “CHEESE THIS WAY”, Blood Stone never lets you play with that fantasy, never lets you feel like you’re the one reacting to each situation with unflappable aplomb. It even commits the cardinal sin of having Bond’s coolest fights and stunts take place in cut-scenes rather than under player control.

For all other requirements – objective markers, collectible intel, enemy locations – Bond has an app. A prod on the down arrow calls up his smartphone which magically sprinkles the screen with useful information, directing you to dropped weapons or, just in case you’ve somehow got lost in the linear corridors, waypoints to the next area. A couple of times you’ll also use it to trigger a button-matching hacking mini-game but, like so much else, it’s a thin facsimile of a gameplay feature rather than anything substantial.

At least the shooty-shoot stuff is moderately entertaining in a “that’ll do” sort of way. Disappointingly for a Bond game developed by the studio behind Project Gotham Racing, the car chase sequences are the weakest parts of the game. Oh, they look the business, with massive explosions and gleaming sports cars that get gradually reduced to scrap, but even on the open road your life as a secret agent is painfully scripted. 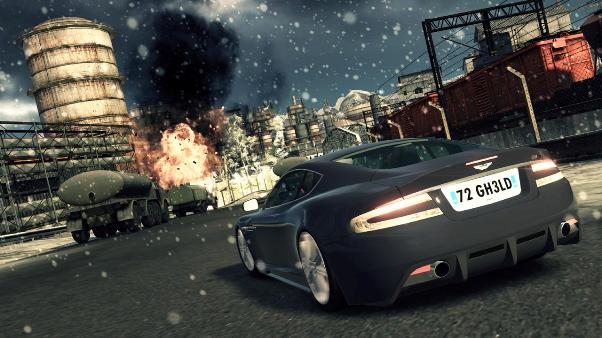 The idea is to catch the other vehicle, of course, but this only happens when you reach the point where the game allows that to happen. What you’re actually doing is keeping up with the other vehicle, and trying to react to the sequential obstacles the game throws in your way. Whether it’s thin ice or an exploding petrol station, everything depends on being in the right place at the right time. Rather than a Bond-esque spin on Burnout’s savage racing or Split/Second’s epic destruction, you get driving sequences that have more in common with Stuntman’s finickety precision or Alone in the Dark’s crude herding.

In a flurry of smoke and flame, often with no clear view of what’s ahead or where the next hazard will pop up from, if you opt to steer left rather than right then you’ll crunch into scenery explicitly designed to spin you around and stop you dead in your tracks. It’s irritating trial-and-error stuff, designed solely to look cool when you get it right, not to entertain while you get there.

All told, Blood Stone’s 17 single-player levels offer generic amusements in line with the base requirements of the third-person action template, broken up by some explosive but fiddly driving chunks. The story they tell certainly resembles a Bond movie from a distance, but the moment-to-moment gameplay fails to capture his essence, so eager is it to lead you by the hand and hurry you along to the next room of dim-witted henchmen.

The multiplayer options extend to three game modes, comprising of the expected Team Deathmatch, a capture-the-flag style mission mode called Objective and Last Man Standing, which has no respawns. Like the single-player offering, it’s thoroughly adequate but adds little of value to the overall experience. It’s here because market research says that action game customers like to see a multiplayer option on the menu screen, not because somebody has found a particularly brilliant way of adapting Bond’s singular world to the multiplayer arena.

Mostly, the game disappoints because it fails to pass the Brand Name Test. Would we still care if it wasn’t James Bond? Almost certainly not. The shelves are full of identical or superior third-person shooters, and while Daniel Craig’s taciturn voice work and Richard Jacques’ sweeping orchestrations make the rote pop-and-headshot mechanisms seem a little more exciting than they really are, it’s not enough to make Blood Stone more than a forgettable weekend diversion. Source: EuroGamer