A new addictive game a landed to the iOS named “Cut the Rope” which has set new records for downloads and nabbed millions in it’s first week. After the popular “Angry Birds”, this game is being anticipated to become one of the all-time most downloaded games. 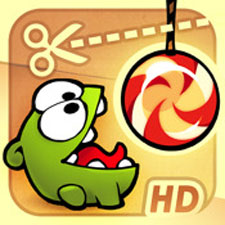 The game is available for all the iOS devices including iPhone and iPod Touch for $0.99 and for iPad at $1.99. There is also a Lite version available to download and try for free. The game has managed to score more than 10 million downloads in the first week of release.

Interestingly, the game is published by Chillingo that also published The Angry Birds. However it is developed by different developers named ZeptoLabs. According to the recent stats, the game has become the fastest selling game on iOS.

You can download the game from this iTunes Link.

The iOS has emerged as one of the fastest growing gaming platforms, and such games gives more strength to it’s position. Although The Angry Birds is available for free, the release of Cut the Rope is not confirmed for Android.