Few days back me and my friend were talking about the innovation that iPhone has brought to the market. It’s not just a need fulfilling product, iPhone gives you an experience that you never had before. It has revolutionized the Smartphone’s market. Dream an application and you will have it on iPhone. Finally iPhone has reached the U.S military. Raytheon a major supplier of U.S Military provided them with software that will allow using iPhone and iPods for the military purposes. 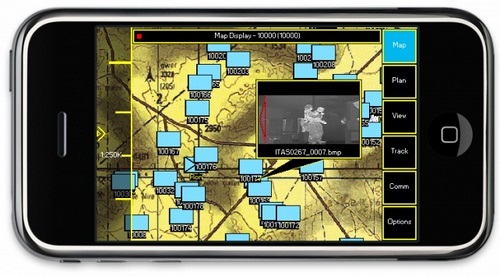 The app is called One force tracker. It will give the live feedback tracking of enemy location and allied troops on a real-time map. The app will also be used to communicate between different units. It is built on military standards and provides free text messaging, joint action planning, reporting and call for reinforcements.Imagine the soldiers holding an iPhone during the wars. Its sound amazing, and is going to happen very soon. The new iPhone app was showcased by Raytheon at the intelligence War fighting Submit in Tucson.

“Among several objectives, Raytheon wants to enable superior situational awareness for war fighters or for police, fire and rescue teams, enabling them to quickly make more informed decisions,” a Raytheon spokesman told Wired.com. U.S military is totally a new market for iPhone. We have to wait and see until this app is used by the military men.