Can ipad be your next portable gaming platform?

Apple iPad has taken the portable gaming experience to the next level. Imagine gaming at a 9.7 inch multitouch display with high power 3D graphics experience, the innovative use of multitouch and accelerometers, and excellent processing power of the device. Apple is considering iPad as a serious portable gaming platform, which might turn to be a better alternative for Sony PSP and Nintendo. 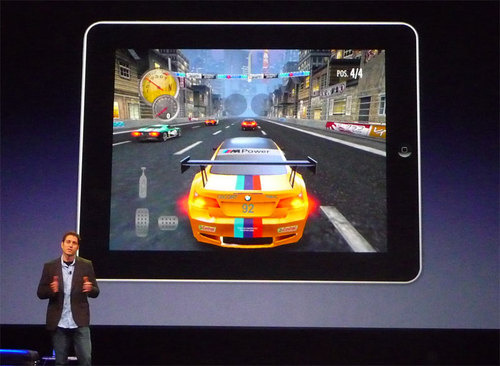 iPad promises an extensive video game support there are more than 28,000 games that are available for iPhone and iPod Touch and almost all of these are enabled at iPad. Moreover developers are working on specific games for Ipad, dozen’s of which could be downloaded right away from apple store.

“The games you can play on these devices are unlike any other, because of the accelerometer and the touch-screen display,” says Greg Joswiak, a senior executive at Apple.

Apple ipad is the future of gaming, with in few years App Store has created much larger collection of games as compare to Nintendo DS and Sony PSP. Electronic Arts’ Need for Speed: Shift and Game loft’s N.O.V.A., both anticipated to see enhanced releases on the iPad. EA has already reworked on Need for Speed Shift for the iPad that comes up with complete touch enabled functions and enhanced graphics. Apple is putting its best to make addictive and superior gaming experience for the iPad. Keep your fingers crossed for the next iPad.