Smartphone OS battle usually turns out ugly, you cannot make an Apple user to move to Android and vice a versa with the Android users, but sometimes logical comparison helps. Let us head on to the giants straight away – iOS 6 VS Android jellybean. iOS 6 will be available “officially” starting October, meanwhile Jellybean is already available on devices like Galaxy S3, Galaxy Nexus and Nexus 7. Let take a look and compare the features head to head.

App store has currently more than 700,000 Applications; most of the applications are high quality and no other app store match up to it, not even android – which has around 620,000 applications on the Google market. Not far behind but quality on android is not that great – you usually have to search to find a good app.

Now let’s compare the maps, apple decided to leave Google map support and went for Tom Tom turn-by-turn navigation with their own map support, whereas the Google maps are the most refined ones, on iOs we have 3D maps which are brilliant but not supported all around the world – plus the lack of transit options and street view are against the favor of iOS. 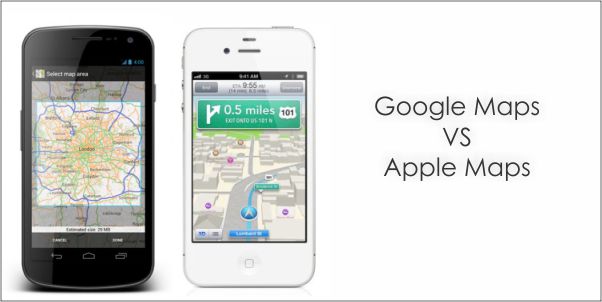 Meanwhile on android the maps are unchanged but receive constant updates, with 3D maps, street view, turn-by-turn navigation and offline caching it is clearly more superior to apple.

Everyone knows that Android is more customizable, even if you don’t have your phone rooted, you can change it the way you want, home screen, icons, sounds, folders and my favorite – the widgets, every time you customize your phone it looks like a new one.

On Apple, sadly there is not much you could do to customize it, you can jailbreak it and apply mods through cydia, but nothing out of the box, even setting ringtones can become a challenging task. In customization, there is no question that android has the lead.

Next comes the security, while Apple is protected from malware, android (thanks to being open source) is prone to it, there are many applications that are harmful for your device, this is a major factor that sets iOS and Android apart.

iOS 6 brought changes to their phone app, adding a few new features like, giving ability to send message if you reject a call, call reminder and notifications – yes the changes are effective, but android has been offering since gingerbread OS, and not only that – but many other as well, all in all android OS is superior when it comes to the terms of phone app. 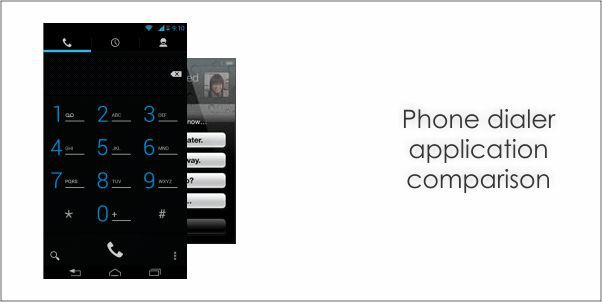 Both operating system offer multi-tasking functionality, on Apple (iPhone) you can double tab the home button – and a bottom bar pops up showing you’re currently running applications, on the iPad you can swipe your fingers across the screen to switch between the apps. 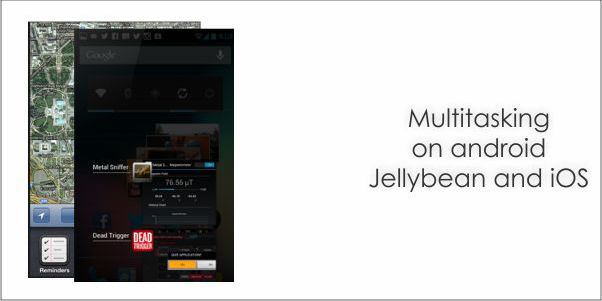 On android ICS and above multi-tasking is incomparable, with just a push of a soft button you are listed with your currently running applications- you can swipe them to delete from memory or tap them to restore from the point your left them. Multi-tasking is what truly defines androids capabilities.

Now the big league, Siri made an instant hit when it was launched along with iPhone 4s, you can set alarm, notes, timelines, timers, clocks, reminders and even ask for directions through Siri and since the last update it can keep track of you favorite sports as well, not only that – if you are bored you can have a random chit chat or share jokes with siri as well. 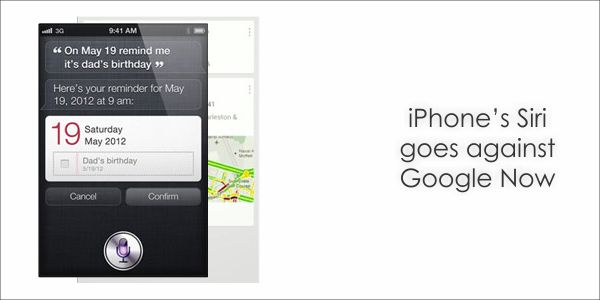 Google Now on the other hand was recently introduced with Jellybean OS, although new and has room for improvements, it gives a tough fight. You can ask for direction, movie timings, weather, ask meanings, do calculations, search books, search scores, sports and even do your random calculations for you. The interface is better than Siri and overall experience is better as well, it seems more natural – rather than robotic.

Let’s some this up with a chart, which will make the decision a little bit easier for you. 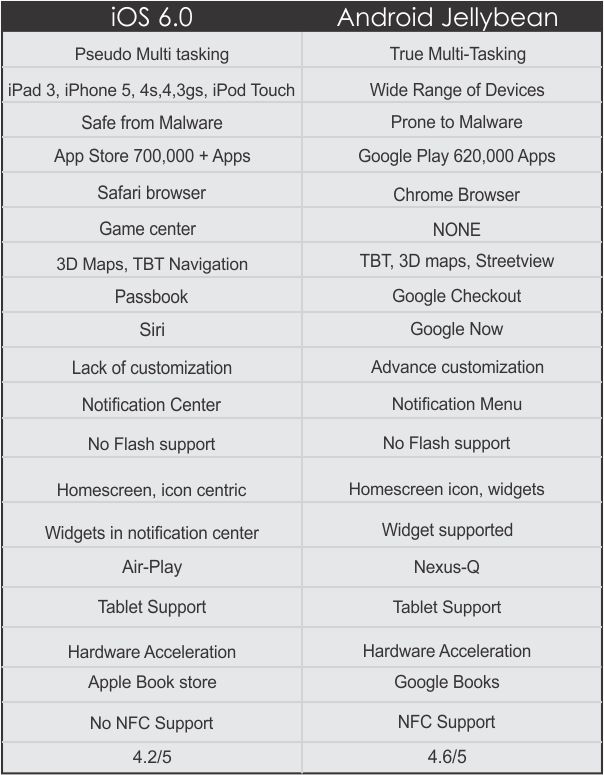