iOS 3.2.2 for iPad 3G/WiFi Released and available for Download

Apple has released the iPad iOS 3.2.2 update for both 3G and Wi-Fi models that is now available for download. The new firmware is released to fix the PDF exploit vulnerability in the iOS which allows hackers to take control of the device and run their malicious code. The same vulnerability is used by JailbreakMe 2.0 Star to jailbreak almost all versions of iPhone, iPod Touch and iPad. 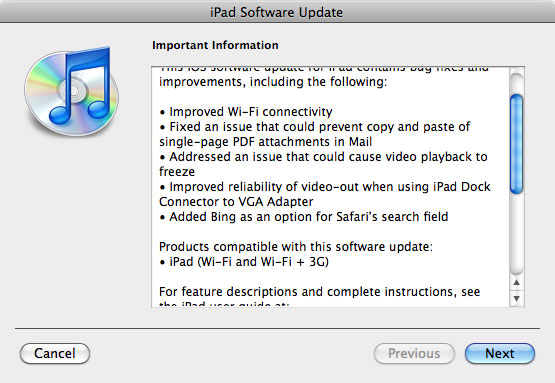 If you don’t rely on jailbreaking your iPad, and wish to secure you iPad from the PDF exploit vulnerability, you may download and update your iPad. In order to update to the new firmware, simply connect your iPad to your computer and run iTunes and select for update.

This is update is compatible for all versions of iPad including 3G and Wi-Fi models.