The owners of locked Samsung Galaxy S II can rejoice for there is now a free application that searches for the unlock code for the smartphone that will enable it to work of the GSM carrier of your choice. The utility named SIM Unlock Code Finder has been released by the trusted XDA Community’s developer Odia’s mode and is ready to work on all compatible devices out of the box. 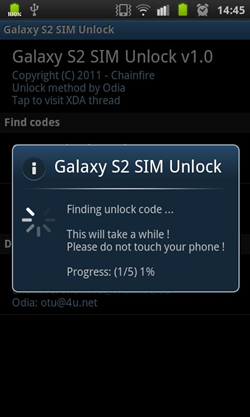 The free application comes bundled with UnFreeze code that will recover the device if the UnLock Code renders your smartphones in an unresponsive state. The application which is marketed by ChainFire can now be downloaded from the Google Android Market. Follow the simple steps below to easily unlock your Samsung Galaxy S 2.

Your phone should unlock now and work seamlessly with any carrier. If, however the procedure fails to unlock the device, the developers warn against multiple tries as that might freeze the device. In that case use the UnFreeze code option with the supported SIM to get out of this situation.