How much RAM is enough?

The amount of RAM a Computer has critically affects system performance. The RAM needs are also changing with the new Windows and programs, and applications these days are taking more and more RAM space. With less RAM, the computers starts using the Hard Drive for temporary data, and thus, the system performance significantly decreases, and it takes more and more time to load programs.

The RAM should also not be too much more than your needs as the extra memory will be useless for your computer. Thus, to maintain a balance between selecting the RAM amount is of key importance.

The largest problem is that memory needs vary greatly from person to person.  For running casual programs, upto 1 GB of RAM is enough for most. But for some applications, RAM sizes as much as 8GB to 16GB are needed.

The base requirements for each Windows is enough to run it properly, but to get a smooth experience, the recommended configurations are the best. The Maximum RAM is the amount which after which there will be nearly no change in the performance on the system, and are best recommended for high end gaming systems and servers. You can check yourself if your Computer or Laptop is overworking, if the hard drive LED is constantly flickering it means that all of the resources are being used and you need more space.

This is also reflected by Windows Vista’s Experience Index for differenct RAM sizes.

As seen, above 2 GB,Windows scale the RAM as equal. Also, increasing the RAM above 2 GB has nearly no effect in te performance of the system, especially for a casual user.

The increased RAM however is useful for using professional applications.

The area where the most RAM is needed is Computer gaming. Games these days have increased hardware requirements, and there seem to be improvement in performance no matter how much RAM is added. Thus, for extreme gaming, RAM sizes between 2 GB to 4 GB are recommended. Above this size, the effect of increased memory are minimal.

Most of the PCs are used for business applications. Some business applications are really RAM hungry, and eats up free RAM in instants. So, professional software usually need bigger RAMs to handle large amounts of data. A particular case is with Servers which benefits the most. Here are some professional software benchmarks for easy comparing the RAM system performance.

Another area where a lot of RAM is needed is File Compression. A large amount of data has to be temporarily stored to be sorted, and then compressed into a single file. It also benefits from total data bandwidth. In this case, a combination of RAM is installed running at same speed in Dual Channel configuration. The results however shows that there is not much disparity in speed with RAM sizes.

The requirements have changed, games and software’s have become more demanding. Typically if you are a modest user a 1 GB DDR 2 ram would be sufficient for you, but it his highly recommended to use at least 2 GB of RAM. As far as gamers are concerned, they should look into the next frontier i.e. DDR 3 RAM. We say that because DDR 3 RAM operates at a higher frequencies which start at 800 MHz to 1600 MHz while DDR 2 has a range of 400-800 MHz. A computer professional using heavy tools and who has at least 10-15 tabs opened at a time or a person who plays games a lot a minimum of 4 GB and 8 GB recommended DDR 3 RAM would do the job. 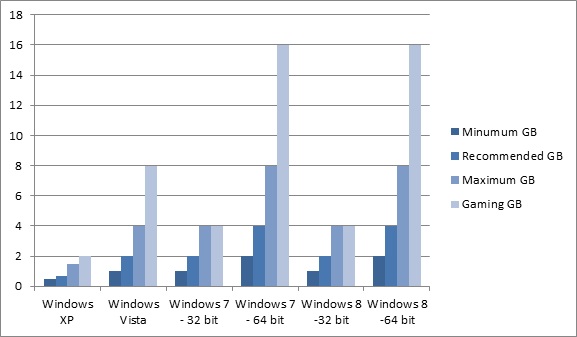