Brad Pitt has announced this week that he may be playing the role of John Marston in upcoming movie based on Red Dead Redemption video game. John Marston is the hero in this cowboy shoot-em-up game available on the PS3 and X-box. According to sources the idea is to make it in the style of an epic Western movie with a few modern touches. 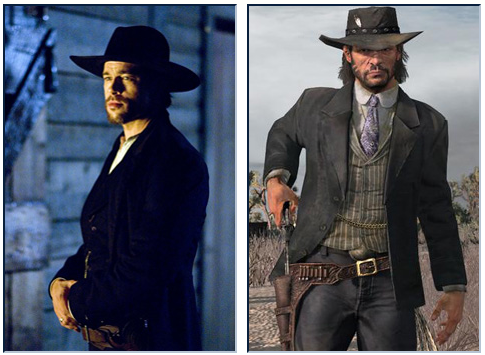 The story of red dead redemption begins in 1911, near the end of the ‘wild west’ era , in which John Marston is forced by the government to hunt down and kill his ex-gang members. The story itself would make a great movie but as we know movies of games usually do not go down well with the cinema going public. Take the game Hitman for example, it was transformed into a movie in 2007 and received mostly negative reviews from critics. But could Red Dead Redemption be any better? After all it does have a solid story line, strong characters and an epic setting to prove itself.

Brad Pitt will also make a good cowboy after staring in the film The Assassination of Jesse James. But would he make a good John Marston is the question I find myself asking. In my eyes, Brad Pitt does not have the attitude or presence that John Marston has. There may be others out there who are right for the part such as Sean Bean who stared in the TV series Sharpe or even Viggo Mortensen. If only John Wayne were still alive.