ARM Cortex-A5 would be speedy and efficient; according to the company it would deliver high performance for smart phones and low cost devices. The device would be twice as power efficient compared to its predecessor ARM11, which was used for many Symbian smart phone and Apple iPhone. Besides it will support all software applications like Android, Symbian, Windows Mobile etc.

ARM Cortex-A5 is fully application compatible with older Cortex-A8 and A9 processors which are currently being used in popular devices like iPhone 3GS, Palm Pre, Nokia N90, Samsung Omnia HD. Below is a list categorizing the ARM processors in terms of their performances: 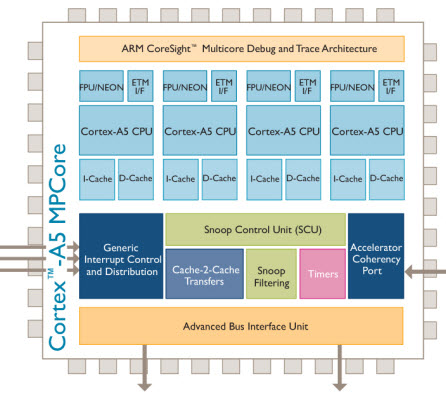 ARM Cortex-A5 processor will start its shipment in the last quarter of 2009. What I assume is that with this speed in advancement in the mobile devices, after few years people would start preferring mobile devices over netbooks. The time ain’t that far when you will start managing your mobile devices in terms of multi-core, dual core or quad core processors, RAM, accelerated audio devices, Graphic cards and high storage capacity.