AMD has released their next generation GPU architecture which will enable game play on any device capable of running HTML, including iPhones. The new graphics cards will be capable of delivering 2.5 teraFLOPS of processing power, which is nearly twice more than the existing graphics solutions. 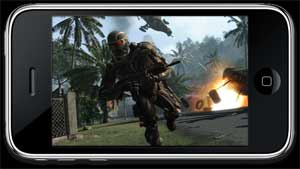 The next generation AMD cards are based on Microsoft DirectX 11 that will be announced in a few months. The graphics chips will use AMD Fusion Render Cloud system to deliver remote gaming services. OTOY is one of AMD partners to use these services to deliver cloud gaming, especially for iPhones. The company successfully demoed Crysis and other high-end games which ran fluently on iPhone.  OTOY uses super computer cloud system to render the games at a central location, and then transmit it to iPhones over a network. Similar services are also being provided by OnLive.

This advancement will allow more Server side rendering clients to deliver similar services to home TVs, consoles and smartphones. The idea is to lower the cost of gameplay, while delivering on-demand processing power from the central server. However, due to network bandwidth limitations, these services are best for small consoles, especially iPhone which has small screens and low resolution pictures does not cause tearing. 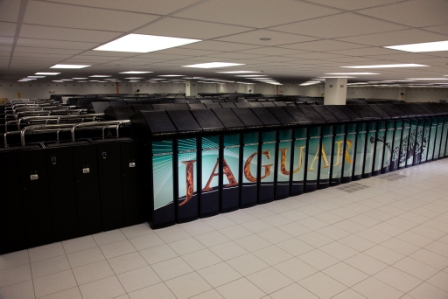 The game is rendered on the server machine at normal resolution. The frames delivered are then compressed to a suitable size that are easier to transmit as well as detailed enough to avoid frame tearing.  Each compressed frame is then transmitted to a client running on Apple iPhone (or other compaible devices) which displays them in the iPhone App. The same network is used to transmit user input back to main server. The whole process uses UDP to enable smooth gameplay at the cost of dropped packets. Thus, the latency is low, and the result is a smooth and jitter free gaming experience with impressive graphics.

This system has been tested for playing popular games such as BioShock, Crysis, World of Warcraft and Grand Theft Auto and the results are simply mind blowing with impressive visuals. However, there were occasional lags which are common on any network gameplay.

The prospective of this technology seems very bright, especially after native support from AMD in their next generation GPUs. The technology is finally being extended to handheld devices such as smartphones and consoles, especially Crysis running on an iPhone is simply impressive. This technology will mature over time, and has the ability to deliver on-demand multiplayer gaming experience. However, the largest bottleneck is network bandwidth and latency. OTOY claims that 20 Mbps connection is needed to deliver HD 1080p quality gaming. This ties the future of this service with network growth.

Many game developers are also encouraging cloud gaming services because it gives benefits such as piracy and copyright handling, ease of support service and constant stream of subscribers at virtually no extra cost. This service will be available to all via internet irrespective of region, which makes it easier to market. Also, due to powerful cloud servers, high quality effects and other optimizations is also possible. Apple also has some incentives as this service will be available as iPhone games. For the end subscribers, these services means low cost of gaming as there is no need to buy high-end hardware. One needs to only subscribe for the service, and pay only as much as he/she uses the service. 3D gaming for iPhone and other smartphones will also open new Vistas for this market.