AMD is moving to take Nvidia head-on with the release of dual GPU Radeon HD 6990 (codenamed Antilles) cards. According to some leaked slides, the new flagship graphics card from AMD shows some striking performance numbers for both graphics and compute capabilities. 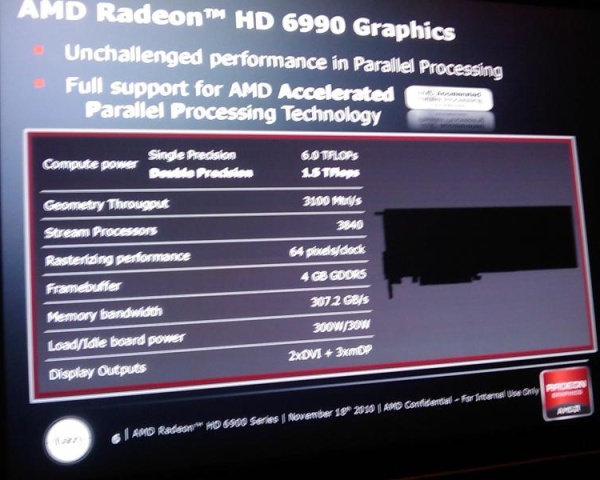 The new dual-GPU solution from AMD is going to feature a whooping 3840 streaming processors with 4GB of GDDR5 memory running at 4.80GHz. The card would be hitting a theoretical performance number of 6.0 TeraFlops for single precision and 1.5 TeraFlops for double precision which is almost triple than the current flagship from Nvidia.

Here is the list of the currently known specifications:

Nvidia dual GPU solution GT 590 is also reported to be in works which is expected to take a hard fight from this offering from AMD. The Radeon HD 6990 is expects a public launch in the first quarter next year. Detailed specifications and pricing details are yet to be revealed.