Research has been made on the harms of cellular radiation on human body, yet no major conclusion occured that could prove cellphones as dangerous. We can’t totally prohibit the use of cellphones because of their negative impacts on the human body, as 4 billion people use cell phone around the globe. However we can aviod some particular models, that studies brought into light, which cause risks for brain and mouth tumors.

Harm of the cellular radiation is measured by SAR (specific absorption rate) which measure the amount of the radiation being absorbed by the body when cell phone is sending signals. The maximum radiation level for a cellphone is set by governmental regulating agencies. According to Cellular Telecommunications Industry Association (CTIA) the specific absorption rate of a cell phone must be less than 1.6. Common health issues regarding the use of cell phone are radiation absorption by head, heating effect caused by the radiation, Electromagnetic hypersensitivity and different sort of cancers. The thermographic image of head shows the exposure to harmful cellular radiations in comparison with one without exposure to harmful cellular radiations. 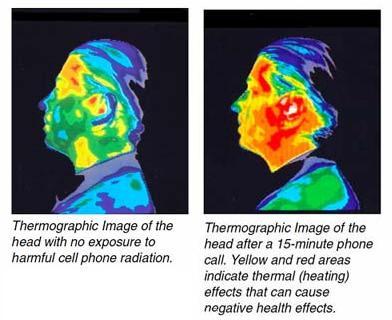 Image from University of Calgary

The data about the harms of cellular radiation on human body is still conflicting. Why to take risk, it would be smart enough if we limit the use of those cell phone that emit high rate of radiations It’s better to avoid these little things before it’s too late. I would like to mention 10 cell phones that produce notable level of radiation as compared to the standards set by CTIA. These are picked from the record of CNETs Quick guide 20 highest radiation cell phones in United States.