Would you buy a $99 Android Jellybean running tablet?

2012 had been a year of tablets, and since the world did not end today (21/12/2012) we have much more to expect. The latest information comes in from the house of ACER who promises to bring a $99 tablet to us by the year 2013. This is going to trigger a war i think, Google’s Nexus 7’s are currently the cheapest tablets you can get for the specifications and if ACER manages to sell their device at $99 then it will defiantly engage Google into offering something more, we really do want that to happen. Now, the $99 price tag sparks a question, question about the specifications.

Over the years many manufacturers have tried and failed launching a “budget” tablet mainly because the failed to keep a balance between price cut and hardware. Now, since the ACER is on the budget, our expectations weren’t so high to begin with, but to be honest it doesn’t disappoint much.

Jumping straight to specifications, the budget tablet will feature a 7” screen powered by a dual core processor and 512 MB of RAM. Inside, you will get 8Gb of internal storage and MicroSD card slot for expansion. The Acer will come with Bluetooth 4.0 support and GPS as well. It has been revealed that the device will be running android Jellybean 4.1.2 which i think is more than what i atleast expect from a $99 tablet.

How Does it look?

To be honest it dosen’t look half bad, the trend set by Nokia and HTc i.e. use of vibrant colors seems to be finally paying off. The ACER features striking blue borders and black body over all. The tablet shows off to be a rugged one and with the presence of a front facing camera i think it is perfect, yes, it probably wont match up to NOOK or KOBO readers, but it is important to keep in mind that it is a good $150 cheaper than them. 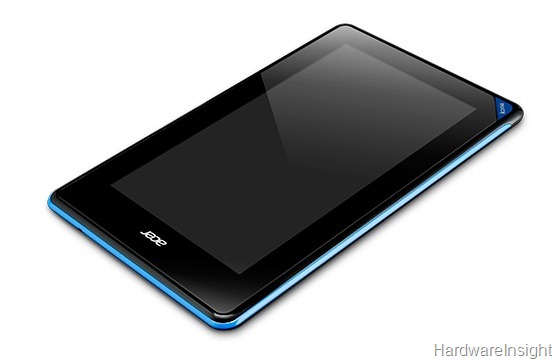 The question remains if it would work. I believe that ACER has got the concoction right, a dual core tablet, expandable memory and those looks for $99 would be a steal. This raises a question in my mind though, if released at the given price tag, the e-ink reader would essentially loose a few points in front of it, besides the battery life everything would be a plus and at almost the same price.