Hot Tablet market gets even hotter as Toshiba’s Android based tablet, called Folio 100, appears on the horizon. The device is powered by, awesomely powerful, NVIDIA Tegra 2; a chip especially design for hand-held devices. The dual core Tegra  250 chip is well capable of full HD (1080p) video playback at less than a Watt of power. Folio 100, having 10.1 inch multi-touch display, will be running Android 2.2 (Froyo) with a 16 GB of internal storage. 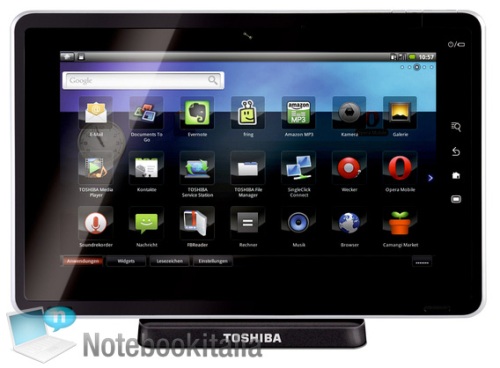 Other Specs include 2 mini speakers and a microphone, on networking side: 802.11b/g/n WiFi, a bluetooth and a  3G network support. The tablet has HDMI port along with USB 2.0 and SD Card input supporting up to 32GB of external storage. There is also a 1.3 MP Webcam for video chat, something Apple iPad couldn’t give. Tablet weighs 760 grams (that’s 30 grams more than iPad WiFi+3G model) and battery life is reported to be 7 hours on random usage. The Tablet will be shipped with many productivity software and of course, you can download others from Android Market. FYI: The tablet has a Flash 10.1 support (in you face apple) Via 14u