It seems that NVIDIA has decided to go with one SoC per year, this time they have announced the much anticipated Tegra 4 which will replace the existing Tegra 3 which was dressed in Nexus 4 and ASUS Transformer series. The new chip retains the 4-plus-1 arrangement of Tegra 3 and arrives with a stunning 72 GeForce GPU cores effectively offering 6 times the processing power of Tegra 3. If you were amazed by the GPU, then wait till you hear about the CPU. Tegra 4 uses the power from 4 Cortex A15 processors and offers compatibility with LTE networks through an optional chip. 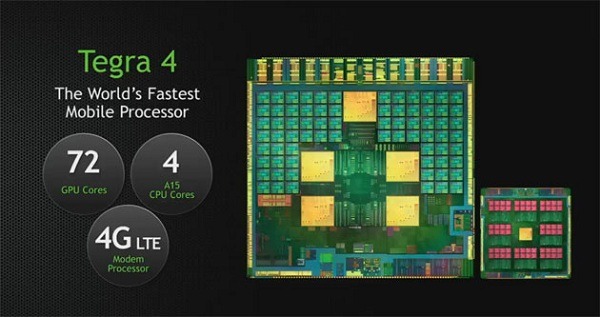 Tegra 4 is set to be the fastest Mobile processor and undoubtedly it will feature in the future smart phones, and believe when we say that those smartphones will be the star’s of 2013. With the Tegra 4, NVIDIA also introduced a new photography architecture, thanks to it, the image processing time has significantly improved and is up to 10 times faster than current platforms. NVIDIA pushed the processor to limits and showed off the processor’s capabilities by shooting HDR burst shots with LED flash, their ambition is to make image processing so accurate and fast that you wont need your DSLR to shoot those gorgeous pictures. 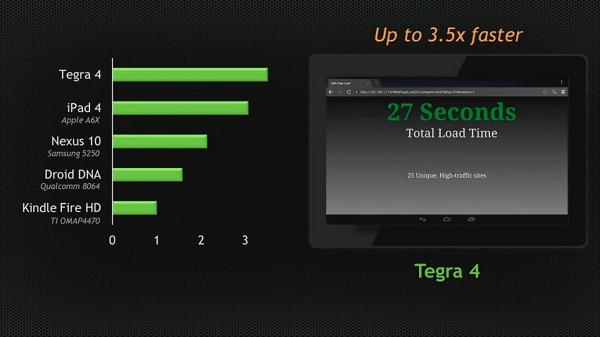 The Tegra 4 will also enable 4K ultra-high-definition video playback, along with that, NVIDIA has utilized PRISM 2 tech that will reduce the power used by the backlight. Thanks to the new technology, the power consumption has noticeably decreased by 45 % when compared to the Tegra 3.

Wrapping it up; another announcement was the i500 Soft Modem, which is a reprogrammable baseband solution that is capable of utilizing a wide range of Networks. The chip can handle a whopping 1.2 trillion operations per second and is 40 % the size of a conventional baseband chip. The availability and price of Tegra 4 chip hadn’t been made public yet, but we hope to soon find it out.