Sprint has recently launched their 4G campaign on the web. The 4G network is actually 10 times faster than 3G, and that gives us another reason that Apple may opt Sprint for iPhone 4G. Currently the 4G service is available in about 20 cities, see the complete list.  Below is the comparison between 3G and 4G provided by sprint. 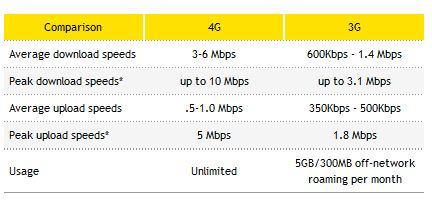 PC world conducted a performance test in 13 cities and confirmed that Sprint is more reliable than AT&T and Verizon. Sprint releasing 4G USB devices and giving the best quality service is a serious blow to AT&T. The average downloading speed of 4G varies from 3-6 Mbps with a peak downloading speed of 10 Mbps which is many times faster than a 3G network. Sprint is indeed the fastest and most reliable network and best option for iPhone 4G. Only time will decide, but we see sprint as the best candidate.