Spectre One announced by HP, All in one Windows 8 Desktop

How can we talk about desktops all along and forget HP, they are famous for their hardware and are usually the first ones to release a new windows platform in the market. They are back with a bang to show off their Spectre series. It is a 23.6″ inch all in one desktop which is stagerringly just 11.5 millimeters thick – now that is thin. There is one shocker though – dispite the recent launches by samsung, dell and lenovo one might have thought that they will introduce a touch supported interface, but it is not the case here. According to HP the reason behind the exclusing being that they did not want to compramise the thinness and that too – to a feature that does not make a lot of sense on fully sized desktops. 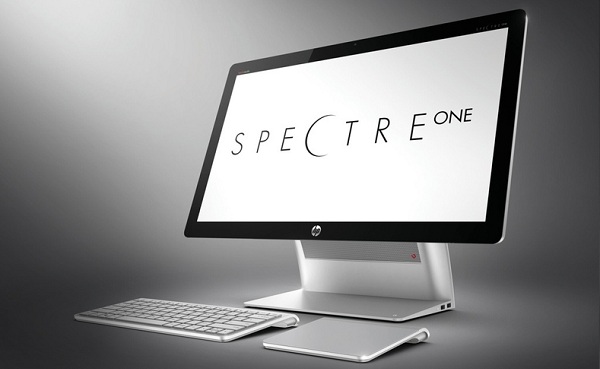 However, you will still be able to enjoy those touch gestures – HP will include a touch based wireless touchpad which can be used to browse theough the start screen and for other purposes. Another attractive feature was the inclusion of on-board NFC chip – which will allow users to connect their android devices with just a slight tap with the Spectre. the connection will remain as long as the device is connected on the same network.
As far as the specifications go, you’ll find IVY Bridge CPU’s with 1GB NVIDIA graphics, 2 USB 2.0 ports nd two USB 3.0 ports are also on-board, micro-HDMI connectivity has also been made available. LAN connectivity and wireless connectivity are also there. Spectre will be made available starting November at a steep price of $1299, considering that they did not include a touchscreen we expect it to deliver exceptional performance and features.
Envy Touchsmart and Pavilion lines will also be updated, the touch smart 20 and 23 will now offer IVY BRidge processors – i.e. the third generation Intel processors which will start selling at $799 and $999 respectively. They will both be arriving in October in which Pavillion would be the budget model lacking touchscreen and will be sold at $450.