Let’s just nip the preambles, ingresses and grab the real shivering point here in the latest release by the tech giant Sony. It has a water resistant body so you can just spill the bear out without giving woes and nags. Another feature that dragooned us to cut short the intros is the camera, not 10 MP, not 15MP, its 20.7 mp folks, just rabbiting the rivalries here. Sony has really injected these tuckering features to make the future market and that’s for sure. So as we have spitted the real thing out, lets come to the confab snags and wriggles in the latest release. 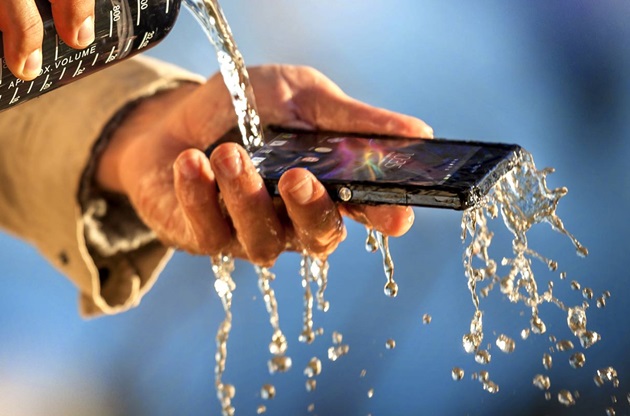 You can’t just lull me be because I’m again coming to the camera, with 1/2.3in sensor, a G lens with 27mm wide angle and a range of new software features including a burst mode that has a frequency of 61pics/2 seconds, Sony has integrated the bombastic cam, a one game changer, I might say.The outlook of Sony Xperia Z1 is just a yanky update to the previous version of the Sony phones, the same  long rectangular shape with flat sides, square corners and a sheet of tempered glass on both the front and the back.

Guess what, I missed the gold without notice, the real part, another game changer is still un-reviewed, Yes, I’m talking about the water bucking stuff as Sony touted. The stout and sturdy new release is water proof so you can just splatter the water without any worries. But one thing here,  it’s only for sweet water. Sony officials said that foster your phone from salt water because there isn’t any bulwark for it in this phone. But this water resistant stuff is just amazing amid the multifarious problems faced by the users daily. Xperia Z1 can handle fresh water at up to 1.5 meters and  for 30 long minutes. and is also dust resistant, provided the flaps covering the microSD card slot, micro-USB port, and SIM card slot are sealed.

Price? Have a poise, nothing is announced officially but don’t expect Sony to be amiable here, it will be around £500 and shipping is likely to roll out within a few weeks.