Skiff to release the 11.5 inch e-reader

Skiff disclosed their e-reader at CES 2010 along with several other plans for future. For now, skiff e-reader will be their first release in the e-reader market. The has a 11.5″ of display with a mind-blowing resolution of 1600×1200. This will enable the reader to see a big page like that of newspaper fully in one screen and be able to read it easily. As usual the reader will have a touchscreen. 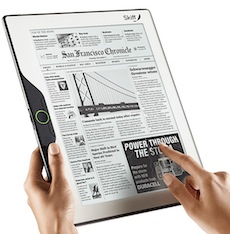 The reader has a round navigation wheel along with several others on the left side. Unlike some other readers, that have dual screen having less reading area, skiff has only one big screen where you’ll be able to do everything. Skiff will also release some applications like sudoku and crossword puzzles along the release of the reader. In future skiff is planning to release apps for palm pre and this reader. Also the company will be releasing a colored e-reader along with a linux based black and white e-reader this year.

Skiff will be launching the product initially in US with a suspected content larger than kindle. International publications and content will also be available to the US readers. The release date and price is not yet disclosed.