Silverlight vs. Flash: Which one is more Flashy and Light?

It all started in 1995, when internet was reaching new dimensions and people at FutureWave realized the need of vector-based animation software to rival Macromedia’s Shockwave. They named it FutureSplash. After huge development cost and time, the product was offered to Adobe and Microsoft. By the end of 1996, Macromedia bought the complete software and released it as Flash, combination of “Future” from FutureWave and “Splash”. 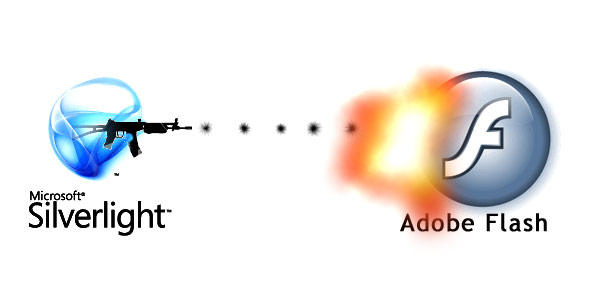 Till Mid of 2007, Macromedia enjoyed the business of this revolutionary software which changed the look of Internet in drastic way. From online advertisements to complete websites to games, Flash was used in with its ease-full interface. Afterwards, Macromedia was owned Adobe and release Flash under the name Flash CS3 with ActionScript 3.0, which brought a new dimension in the applications of Flash. The vector graphic and editing abilities were enhanced by integrating Adobe Illustrator and Photoshop.

Also in the mid of 2007, Microsoft launched rival technology to Flash named as Silverlight under the codename of Windows Presentation Foundation (WPF). Earlier it was released as a video streaming plugin for browsers but later turned into a development tool with interactivity features and interfacing for .NET languages.

Although one should appreciate and applaud Microsoft’s idea of breaking flash’s market and monopoly. But it seems very much far as Flash is so much powerful that it pushed Real Player, QuickTime and other efficient movie files way behind.

Following is a comparison of features (up till today) with typical applications:

By looking upon the above analysis, one concludes that Silverlight has some major drawbacks in UI, editing and creating of graphics but it has strong command over content development through programming languages. It will not take much time for Microsoft to beat Flash completely, and from a user’s perspective it will sure provide rich-content experience.

Personally, I’m more diverted towards Flash mainly because of its time in the market but using new and rival technologies is always fun. The best part of Silverlight is that it provides free web services from content upload, taking advantage of advance global network and content delivery network of Microsoft. Looking forward to how these giants compete and bring better solutions for us.