Samsung strikes back with the Corby II S3850

Samsung will soon launch the successor to its  Corby mobile phone.The device became really popular with the youth mainly because it brought touch screen technology with an attractive pricetag to the masses.The refreshed Corby II is back again to rival other budget-friendly touch screen mobile phones.

The Corby II S3850 is a slim colorful mobile phone which aims to deliver basic functionalities with a few add-ons.It offers a 3.2inch Capacitive touchscreen display which runs the latest TouchWiz UI and comes equipped with a 2 Megapixel camera.Thankfully theres also Wi-Fi and Bluetooth 3.0.Other pleasing additions include an FM Radio capability and an accelerometer.The Corby II comes integrated with Facebook and Twitter so you can stay connected on the go.You’ll also be able to download apps. 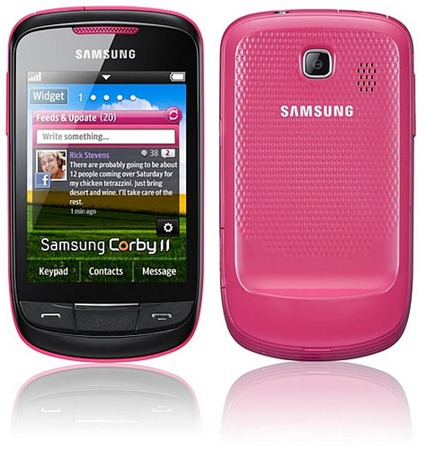 However with such low-priced smartphones, you do actually compromise on quality and features.The Corby II appears to be a smartphone but actually offers average features and you might experience a lag while navigating through the device.Its not even a 3G phone,text input wouldn’t be easy thanks to a cramped 3.2inch screen.You’ll be able to snap pictures but you might not want to show them to anyone, no flash here but you do get smile detection (Whats the point?)

The Corby II will be available soon in a variety of colors including black, yellow, pink and white.