After Galaxy phones and Galaxy Tabs, Koreans welcome the release of the Samsung Galaxy Player. It appears that this line of Samsung Galaxy products runs parallel to Apple’s iPhone, iPod touch and iPad family. So why is the Galaxy Player any different from the rest? 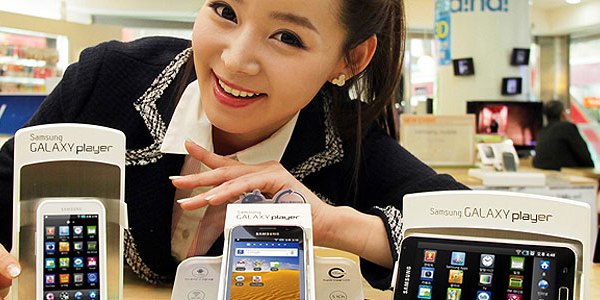 For starters, it has a 5-inch touch screen , HDMI out, and runs on Android 2.2 Froyo. This Portable media Player (PMP) even has GPS , Wi-Fi and an 5 Megapixel camera. It comes in 16GB and the 32GB model. What’s really surprising is the Samsung has targeted this product towards students, gone are the days when PMPs were considered distractions. Korean students now get to benefit from built-in dictionaries and even free access to the Samsung Smart Edu App.

The available models include YP-GB70, YP-G50 YP-GB1.The Samsung Galaxy player was also showcased at CES 2011 but unfortunately it may never be available to Galaxy-fans in the US.I f by any chance you’re in South Korea and want to get your hands on one of coolest new products of the Galaxy line, see the Official Samsung Website. [via Akihabaranews]

Drop your comments below to let us know if you think the Samsung Galaxy player is better than its American counterpart, the iPod touch.