Well, Samsung seems to be taking the lawsuit result rather well. Soon after releasing the galaxy note 10.1 Samsung has decided to release Galaxy Player 5.8. Yes, “5.8” does mean that it carries a gigantic (for hand held device) 5.8” screen, sadly though it is let down by low resolution screen of 960 x 540 with pixel density of 190ppi. That is low, although a large screen, in front of which a SIII and the rumored Galaxy Note 2 will look like a dwarf. 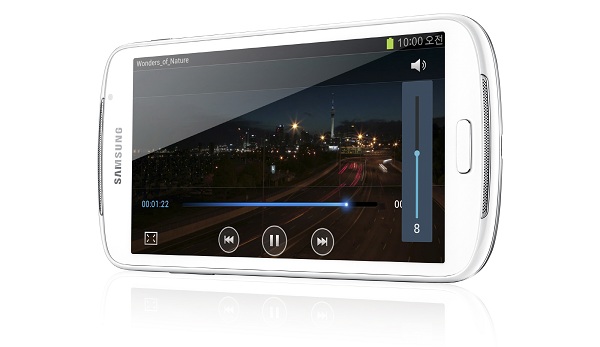 The Galaxy Player will most likely have 16 and 32GB variants; speakers on both ends of the phone suggests that it will compensate for the display by delivering surround sound, the device is supposed to be running android ICS- not a clever choice considering most phones are now receiving Android 4.1 Jellybean. Samsung has also decided to drop their popular AMOLED screen for this device, another setback – No information about remaining hardware has been spilled by Samsung guess we will have to wait till IFA perhaps.

The success of this device depends on what price does Samsung set for it, considering it is a mid-way tablet and a multimedia device it has to be priced right to give other android media tablets/players a competition, the closest would be the Nexus 7, although it is a 7inch tablet; Galaxy media player 5.8 does not have a small screen as well. Users like me who are happy with the screen on galaxy nexus would consider it as a tablet replacement. Hopefully it will be within reach and will have good hardware specs.