Yes you read it right, Adobe is pulling the flash support from android; you won’t find the “Flash” application when you log into your market application. This was long time coming as HTML5 grew in popularity steadily. Flash also had a major setback when in the time of Steve Jobs Apple neglected it – this caused a void for flash in the mobile industry. Steve Jobs insisted that HTML5 was the future; it seems as though that his vision was right. 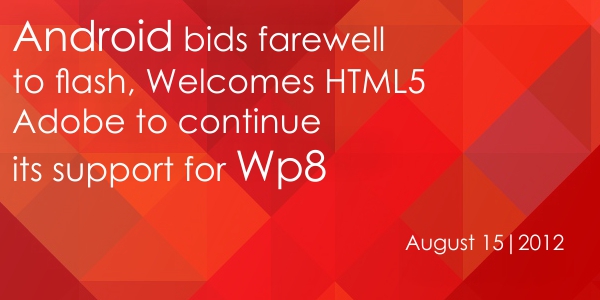 In 2007, Adobe started to expand their “Flash” support to mobile platform the time was appropriate as smartphones were beginning to place an impression on the market. Adobe pledged to give the desktop experience to hand held devices, it seems that they have come up short to their vision courtesy HTML5 which now powers most of the websites like the ever popular YouTube. Although it will take a lot of websites some time to implement HTML5, but the turn over seemed inevitable as flash grew old.

This however does not mark the end to flash, Adobe will continue to work on flash for desktop and will focus on optimization and games genre. Windows 8 will likely feature Flash, but for android it is the final nail in the coffin. Do remember that Google discontinued support for flash in their Jellybean OS and if you are a flash fan and on android then it is your last day to get your hands on it.