Qualcomm has launched its latest S4 Pro Mobile Development Platform (MDP). MDP provides developers with the platform to test and develop their applications and use this device as their testing device. The rumors about Quad-core version of snapdragon were there, but no one had any idea what it would be like. This is the first time that Qualcomm is offering their product in the form of a tablet. 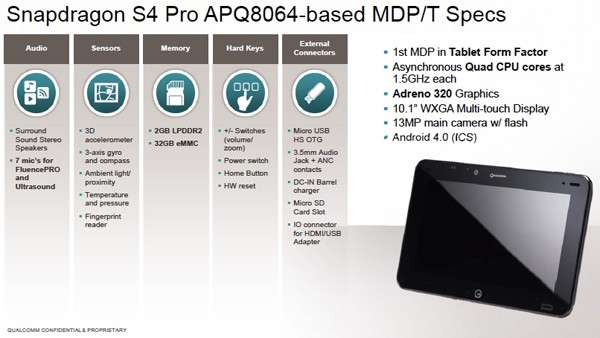 The specifications on this device are and I quote “delicious”. Running a Quad core APQ8064 chipset, boosting 2GB RAM, serving Adreno 320 GPU, Micro SD card slot, A 13 megapixel HD camera and a whopping 7 microphones carefully assorted throughout the device. Isn’t that delicious? Well the specifications are, and by now you must have figured it not cost a nibble, indeed it won’t. The Qualcomm S4 will set you back a whopping $1299.

Now let’s justify the price, the benchmarks are already out and they are simply amazing. The new Adreno 320 GPU churns up an astonishing 132fps. The galaxy SIII comes up second with impressive 99 fps. 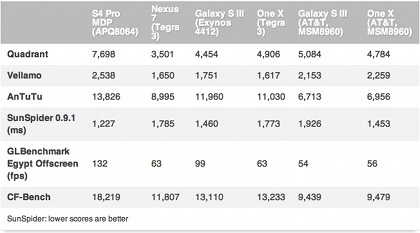 We can’t do anything but to be impressed by this impressive device. The price might be too high and the battery will not fare well under the normal circumstances, but since it is aimed at developers, we can see a future of true HD games and applications coming to life. For this Qualcomm must get to work on developers like NVidia has done. The NVidia Tegra 3 is getting a lot of support from developers; Qualcomm has to do the same if they want to see a future for this amazing MDP device.