The launch of Apple’s iPad mini creates a war zone, a war zone featuring all the latest 7″ mini tablets. Although many tablets were released amazon, kobo and kindle fire HD to name a few, but the one which excelled in all categories is Nexus 7 by Google. Nexus 7 featured a Quad core processor and a NVIDIA Tegra 3 chip, which is far superior than the ones used in other tablets and it is the only ‘Major’ competition for iPad mini, so lets take them head to head and figure out which is best for your money. 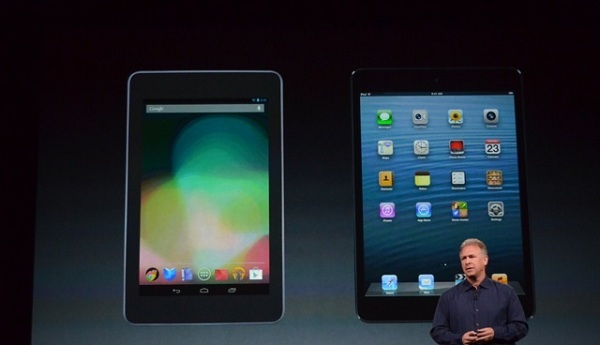 Nexus 7 launched a few months ago features a 800 x 1280 pixels, 7.0 inches (~216 ppi pixel density) screen whereas the iPad mini boasts 1024 x 768, 7.9″ screen, from specifications it is clear that Nexus 7 has the upper hand when it comes to display, and speaking of which, it is the most integral part of a tablet. Processing is important as well, Nexus 7 sports a Quad core processor, 1GB RAM and 8/16 GB memory options, whereas ipad mini features A5 dual core processor processor, 1GB RAM and 8, 16, 32 and 64GB memory options.

ASUS was praised for producing a high quality tablet, even after sporting a price tag of only $199 for 8Gb version, the device felt more of a 400 $ device. Same can be said for Apple, they always produce the highest quality products and iPad mini is no different. but the prices revealed are high for iPad mini, the starting model is going to cost $330 excluding shipping and extra charges (country specific).

So, iPad mini does look impressive and the edge to edge screen design is surely catching on. But, from my point of view, Apple missed a shot with “Budget” tablets. The price difference between starting Nexus 7 and starting ipad mini is more than $130 which makes me think if iPad will take the throne.