We covered the news that Apple removed YouTube App from iOS 6 because their license agreement came to end in 2011. The good news in that was that Google had a chance to introduce a native App that would feature their own interface rather than typical Apple interface and that is exactly what Google has done. The new App features the typical Google minimal design seen on Google+ iOS App. The App is responsive and processes the videos fast. 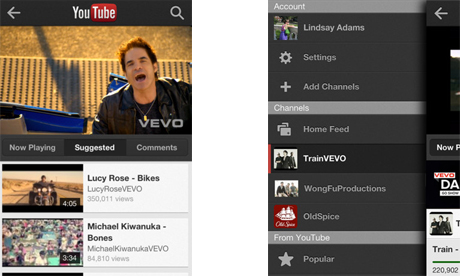 The overall experience has changed, iOS users now easily navigate within the application with swiping from right. It will bring the menu from which you can select your YouTube channels and subscribed items. Searching has improved as well, with more accurate results. Along with that YouTube has offered monetization options, phones using old YouTube applications won’t be able to load newer videos and channels, say – VEVO channel. Searching now has auto fill option just like in the desktop version, for instance you type “tomorrow” and it will suggest songs with the title “hello”.

New features include sharing options as well, users can now share their videos on Facebook, Google+ or share the links on twitter, links can also be sent through text messages or via e-mail for users to view them later.

One feature that did not stumbled from the Android platform to the iOS is the pre-caching of videoson Wi-Fi, in response Google justified that by releasing a statement that iOS does not fully allow them to use this feature. No matter what, the move from Google to introduce their native app to iOS users will benefit both – iOS users will get a better App and that too a responsive and cleaner one than before, while Google will enjoy their branding.

The App is available to download for iPhone and iPod users, meanwhile iPad App is still in works which will hopefully be made available in coming months.