Earlier this month Motorola announced several devices but left one for the big finale, announced in London is the new RAZR I which is made in collaboration of Motorola and Intel and powered by Intel atom processor. Although that has been done before, but not by a company like Motorola, which is now owned by Google. The main selling point of RAZR I is indeed the processor, which is a single core, multi-threaded 2.0 GHz processor. Boasting 1GB RAM, the features blend in well and we get a perfect harmony from the design and hardware.

Speaking of design, it is no bigger than the iPhone 5, but as advertised by Motorola, the screen covers the phone from “edge-to-edge”, yes that is an over statement, there is bezel around the phone but it is a lot thinner than any other device- considering it is as wide and tall as the iPhone 5 and has a 4.3” screen, we reckon that Motorola has done a fairly impressive job, the screen is scratch resistant – covered by Corning Gorilla glass 2, and the 4.3” display is of qHD resolution (540 x 960), Motorola could have done better than that, considering the new devices are now offering full HD displays.

Moving on to the meat, the processor – it is the first atom processor clocked at 2GHz, Intel has optimized the entire experience with multithreading, Intel suggests that their processor out performs current dual core mobile processors, benchmarks will tell if that is an over statement. The GPU is built on 32nm process which made Intel promise good gaming performance. Battery is large as well, 40% larger than iPhone 4s (as Motorola advertised), there is an 8 megapixel snapper at the back which can take 10 snaps in one second (faster than digital SLR).

Along with all the features, NFC is packed in as well for easy sharing and easy pairing with other devices. Android ICS powers the phone, and Motorola plans to upgrade it to 4.1 as Intel has already ported it to x86 architecture. For the cherry toppings, the boot loader will be unlocked, which means that developers will have their hands all over the phone, there is no denying that we need another phone as versatile as HTC’s HD2, which despite being old ran WP7, Android 2.1-4.1 and Ubuntu.

RAZR I will be made available starting October in UK, France, Germany, Brazil, Argentina and mexico, the only thing that sets apart RAZR I and the RAZR m is the processor, while the “m” sports a dual core krait processor, “I” for intel replaces it with atom. WE will make a detailed comparison as benchmarks of RAZR I pour in. 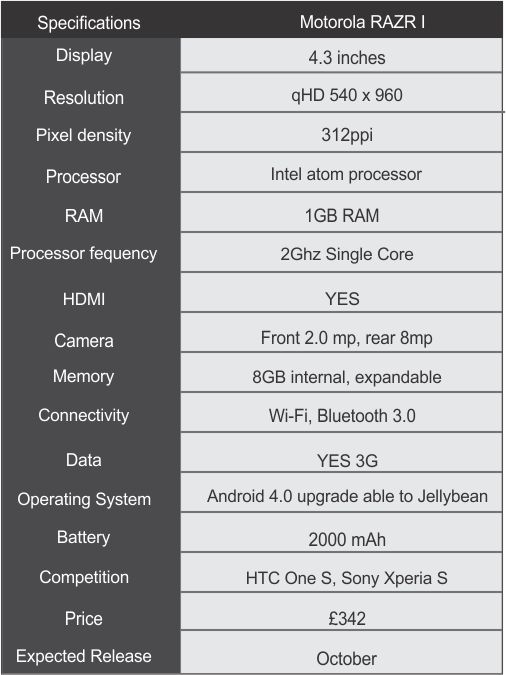