Android has evolved ever since its launch in 2007, so much so that companies have decided to choose Android as their choice of OS for their cameras and even gaming gadgets. The announcement from Samsung that their next point and shoot camera will have android led us to think what could be more. Archos answered that by introducing a 7-inch gaming tablet that uses android ICS. Although Sony Ericsson took the initiative when they released Xperia-Play series but it never really caught on and it was always limited to dedicated Play games. 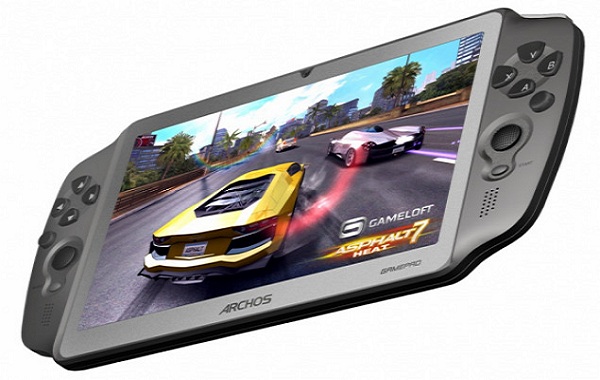 Now however, Archos has stepped up and announced gamepad, the main idea of gamepad is to provide hardcore gaming experience on android platform, it ports hardware buttons and joy pads to avoid touch controls which in our opinion are way to unpolished to adapt in high end games. Along with that there will be a 7 inch capacitive touch screen as well. Judging by that it will be in direct competition with Google’s nexus 7, but the price has to be right – it is. While the Nexus 7 is being sold at around $230 (including taxes and shipping) the gamepad will be sold at $180, that rather amazing for a game centric tablet.

Now let’s come down to the business, the hardware. Gamepad will be powered by a 1.5 GHz dual core processor, which seems “okay-ish” considering Nexus 7 is running a quad core Tegra 3 processor. But things change from there, the GPU that powers the gamepad is a Quad core Mali GPU. Sounds crazy enough but it just might overpower the Nexus 7. But the fact that it runs ICS is a little set back.

The gamepad will be Google certified as well, meaning that it will feature official Android and play store with Google maps and other official Google applications. The thing which is still vague is the display details; unless it boasts a resolution of 1280 x 768 Nexus 7 will remain the king of budget tablets. Although the built quality from Archos is sometimes unreliable, but having said that the recently announced Archos 101 G10xs is receiving good reviews from the critics and it seems that Archos is in an upswing from shaggy built quality.

Only time will tell if it turns out to be as good as it sounds, considering the price they have planned to set for it is an added plus for Archos. The GPU is spot on as well, Mali-GPU have always performed well and are excellent for gaming purposes. Having said that, a good screen resolution is important as well and it should not be overlooked.