Lenovo announces IdeaTab A2107 and A2109 Tablets

Well, tablets seem to be the gadget of choice by major brands. First the iPad 3 was launched then the ASUS transformer and then finally the Nexus 7. Lenovo does not want to stay behind, after releasing their s2103 they have scheduled to release two new tablets to strengthen up their lineup.

Lenovo will launch these tablets in September this year, so we won’t have to wait long to find out their true potential, but let’s map out what we know so far.

The Lenovo A2107 is going to be a budget tab with a 7” screen. A china version has been released on Lenovo china store and specifications have been revealed. The A2107 will have a screen resolution of 1024 x 600, sporting a MTK6575 (Cortex A9) Single core processor with a RAM of 1GB and 4GB internal memory.

Lenovo A2107 will be released with android 4.0 ice cream sandwich, 3G network a rear 3 mega pixel camera and front facing 2 mega pixel camera and for a cherry on the top it will have the support for expandable memory. According to Lenovo, A2107 will provide long lasting battery with usage of up to 10 straight hours. Not only that the A2107 will feature a first i.e. dual SIM slot in a tablet, Sounds a little crazy to us.

The Lenovo IdeaTab is readily available on Lenovo store (china) for $200, which sets it at par with Nexus 7 price, but a single core Cortex A-9 is not really what people want now since you can get a NVidia Tegra 3 device for that price *Cough Nexus 7*

On the other hand Lenovo will also launch a 9” tablet according to what Lenovo quoted “A full size tablet on a budget” it is going to be priced reasonably. Not sure about the pricing though, The Lenovo A2109 will have a 1280 x 800 resolution screen memory of 1GB is expected with 4GB internal memory, there is no news about the processing capabilities but we hope it features at least a dual core processor, AT LEAST. 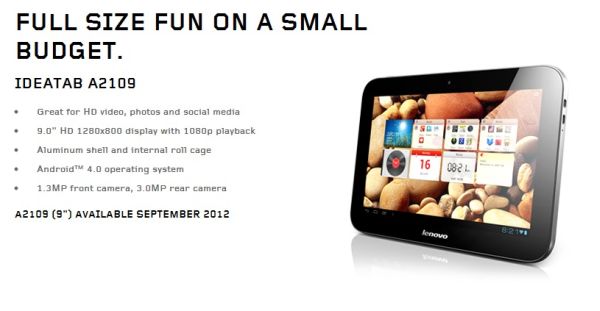 On the same note, A2109 will also feature Android 4.0 along with it a 3 megapixel rear camera and a front facing 1.3 camera. It will have a strong Aluminum casing so quality can be assured, but the features are vague and unless they steam up the processor, the tablets aren’t simply going to compete with the tablets currently available.