Rugged key! Just what we need, in our ever so fast moving life we want to have something that is durable, looks good and secures our data. Well, LaCie has done just right that by introducing its rugged key. The brand is known for producing tough shell rugged devices and Flash drive is their latest frontier in achieving that. 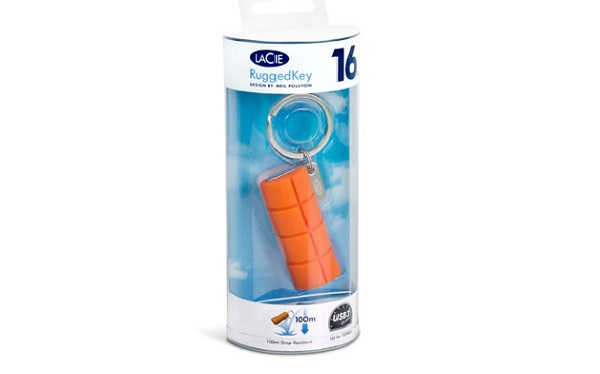 LaCie is known to protect their devices while maintaining the aesthetics of it, vibrant colors and rugged design is a perfect combination for users like me. First impressions, it looks fat as much as the SanDisk extreme which is a monster of a device. The mass on the LaCie however is justified. The thick cushion surrounding the LaCie will protect your data from high heat, water resistant and will protect it from even a 100 meter drop. To be honest it looks like a hand grenade. But out of its shell it’s just like a “key” maybe that’s why they named it rugged key. But it will fit your pocket well as it weighs around 1.06oz which is not bad at all for a rugged device like this. 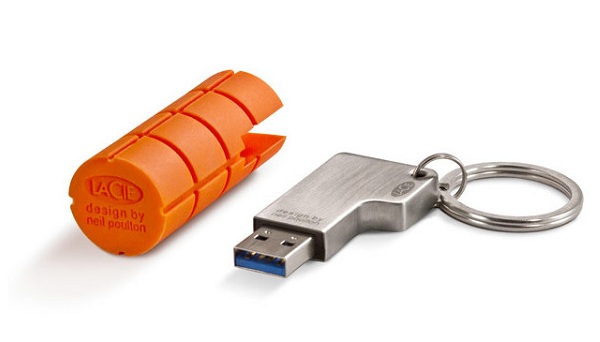 Ever faced a problem of accidently wiping your data from your USB flash drive? Well that is not going to happen anymore. Wuala secure cloud storage will assure you of that, it keeps on record of the file on your flash drive while the other is maintained on cloud storage. So, if you ever accidentally remove or forget you had important data you could always reach for the clouds. 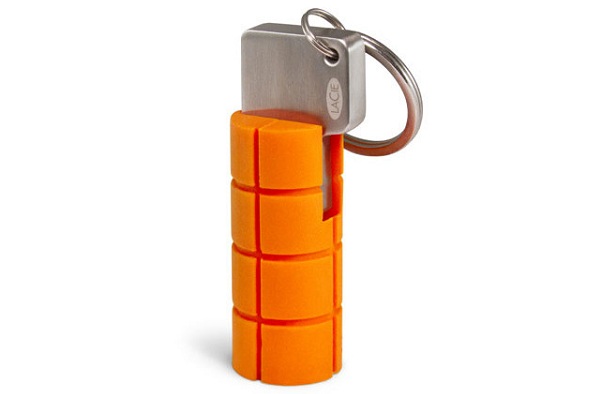 The LaCie Rugged key is a USB 3.0 Flash drive, no surprises there as it would have been foolish to release a 2.0 USB now. Along with that it competes with the strongest competitors in the market like SanDisk extreme. Rugged key is also equipped with built in AES 256-bit encryption, if you don’t know it is hardest to break, it would take brute force a trillion years to break through 256-bit encryption.

Since it is a 3.0 USB we expect fast transfer rates, and they are. LaCie can notch up to 150Mbps read and write speeds, this is fantastic. LaCie is also backward compatible which means that if your hardware does not support USB 3.0 it will run on 2.0 versions without a hitch. So, overall features of high speed, extra durability, compatibility and security prompt it up as a very good device to carry your data in. The additional feature of Wuala means that you will always be connected to your data even if you lose track of your flash drive.

Well we have to say that LaCie is reasonably priced with 16GB model being sold at $39.99 and 32GB for $69.99. With the transferring speeds of 150Mbps it puts it right in the slot of the SanDisk extreme and the Patriot, but for the features LaCie proves to be worth the money.

LaCie was announced on 2nd August 2012, with the company operating in Europe, America and Asia the availability will not be an issue. You can find it at Apple reseller and LaCie online stores for the prices of $39.99 for 16 and $69.99 for the 32GB model.

The rugged key is an amazing contraption to say the least, for a little gadget as a flash drive and to provide so many functions is amazing. It puts it ahead of the SanDisk extreme, the patriot supersonic and even the Lexar jump drive. If you are looking for a durable, high performing, rugged and yet visually pleasing flash drive look no further, LaCie is the way to go, but saying that there are other options as well in the USB 3.0 Market.