Some people were a expecting a little more out of the iPhone 5, a better camera? NFC? A different design weren’t? Well if you weren’t impressed that much by the iPhone 5 and had saved up for a new phone we have some competition for the iPhone 5. Samsung announced the Galaxy S3 a few months ago and a week ago nokia held a very successful event announcing the Nokia lumia series.

Lets take a deeper look into hardware/software specifications to see if you should stick to iPhone or move on towards a new frontier. From the Samsung department we are going to pick Galaxy S3 and from the Lumia department it is going to be the Lumia 920. 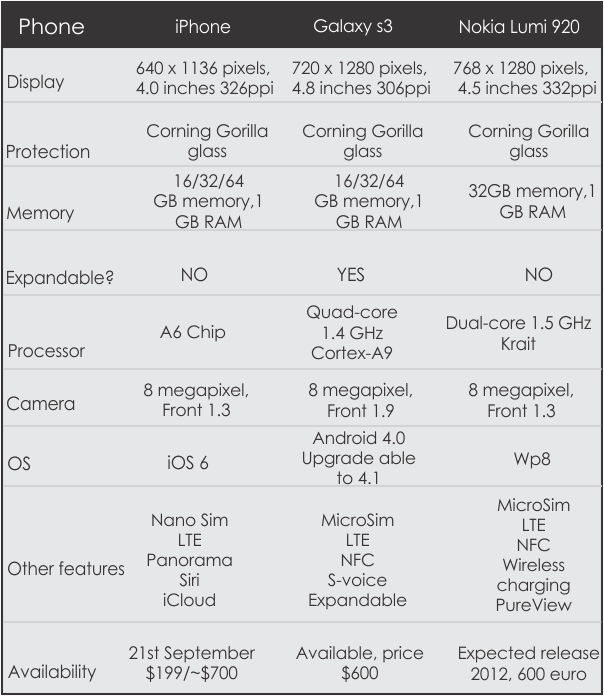 There you go, when compared head to head the GS3 and the Lumia 920 has more to offer. When talking about the price, the iphone cost $199 on a 2 year contract, if you want it unlocked then it will cost you somewhere around $700. The GS3 price was recently reduced to $580 – which gives it the best value for money ration and finally we have Lumia which is set to be priced at 600 euros brought many innovations and an emerging OS WP8.

If WP8 can solidify its roots –that would be by expanding the market support, then Lumia is the obvious choice- it brings out so manu new features and the styling is spot on. Gs3 is the most affordable of them all and it is set to receive its official jellybean in October. iPhone 5 brings promising hardware, but the fact is that other phones are already offering same/better hardware and software.

Frankly, it is just a matter of opinion – if you are just looking at the specifications than iPhone 5 is not that innovative – 4s had more to offer when it came than the iPhone 5, Lumia on the other hand is one step forward for WP8 phones and truly a worthy option to consider.