Let’s get straight to the business, the iPhone 5 made its way and 2 million devices have already been pre-ordered, despite the excellent sales the fact remains that there was not much Apple brought us at their event, let’s take a look what features excelled in the new iPhone and what were missed. 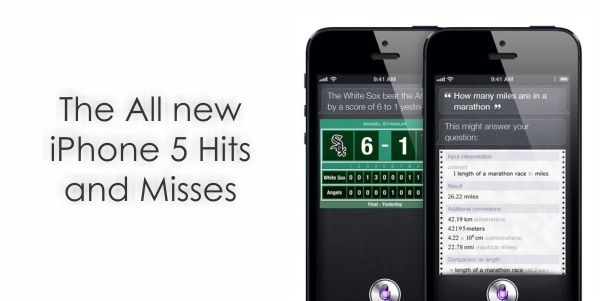 Let’s take a look at the “misses” first.

The benchmarks revealed that iPhone 5 do perform well, but was it worth a year’s wait? The processor is an A6 and has higher frequency, and the RAM is 1 GB – again with higher frequency, but is it enough to compete with the Quad core monsters? Price range is almost the same for Android quad cores and dual core iPhone 5, which makes us believe it is the Miss number 1.

Next up the design, the thing is that we have witnessed Apple changed the design every second iteration, the original iPhone, 3g, 3gs, 4, 3s and then the iPhone 5, yes, the screen is bigger – but it does not change the fact that they look awfully like each other.

IPhones don’t support expandable memory, that’s mainly due to its dependencies to iTunes, with video/audio formats getting better and heavier than mp3’s and m4v’s the fact is that 16-64 GB memories are getting a little short. To cover that, a 128 GB option could have been introduced – if not than how about expandable memory – it’s not impossible, we have expandable memory on WP8 devices don’t we?

NFC is catching on, with more and more stores offering hard cash options we think that Apple really missed the cue over here, adding the NFC would have helped NFC grow as well, considering everything Apple tries – catches on.

Yes, the connector was long due but it would have been better if it was an industry standard, you would have to get a 29$ jack to connect your iPhone 5/ iPod 5 to your old accessories.

So, if you want to play a movie from your device to your TV; you would be required to purchase a $99 connector, it seems as though Apple take out the “wanted” features and charge extra for them. An HDMI port would have helped boost up the image of iPhone 5.

Next thing up is the battery life; the iPhone 5 delivers the same battery performance the same times as the 4s despite a bigger battery. But the inclusion of 4G LTE and a bigger screen – it sucks up more juice, lessons should be learned from the RAZR MAXX which gives couple of hours of more battery juice.

Although not that innovative, some features did excite us here they are.

It must have took a lot of courage for apple to move from their standard of 3.5 “ screen to a 4 inch one, but truth being told – it is a good size for a phone, besides that the resolution of 1136 x 640 which is lower than modern phones, I boasts a 326 pixel density which gives sharper and more clearer display.

Next thing that we liked about the iPhone 5 is the processor, although a dual core phone clocked at 1GHz it is still 25 % more than that of 4s, again; despite being a dual core phone it’s performance is better than dual core krait processors. The A6 is the first Apple SoC to use its own ARMv7 based processor design. It’s Apple own creation

Yes, the iPhone 5 is a 4G LTE device, and the data transfer speeds are faster than current devices like the HTC ONE X or the Galaxy S3.

The iPhone 4s features in our best camera phones shoot out, and yes its performance was rather outstanding. The camera on iPhone 5 is an 8 megapixel camera with resolution of 3264×2448 pixels, autofocus, LED flash with features like Simultaneous HD video and image recording, touch focus, geo-tagging, face detection, panorama and HDR.

So, this sums up all the factor that we think are in favor of the iPhone and those which are not, the 2 million pre-orders show how much of a grip does Apple has in the market. Would you buy one?