Time is right to compare the two giants of the mobile industry, Apple coming forth with their iPhone 5 and Google putting up their Nexus 4 in the race changes the whole market scenario. The question remains; which device is better than the other, with Google relying on the heart of Optimus G and Apple taking the matter in their own hands with self-modified processor. Let’s take a look which device leads in which region. 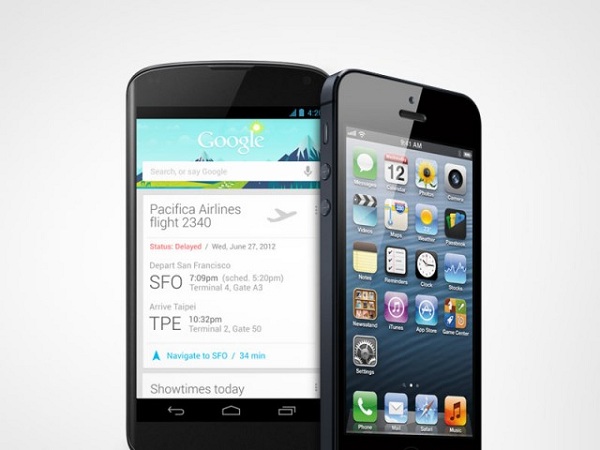 Gorilla glass is now becoming an industry standard, so both devices feature a scratch resistant glass surface, it is worthy to note that Nexus 4 features Gorilla glass 2, meanwhile iPhone 5 sport gorilla glass with olephobic surface. Head to head, the screens are pretty close and the size of nexus 4’s screen makes it a better device for gaming and watching videos.

The thing Apple was most proud about their new phone was its dimensions, iPhone 5 is stunning 7.6mm thick as opposed to 9.1mm on Nexus 4 so iPhone 5 is sleeker and easier to handle, but, without being biased I personally like a little ‘feel’ from the device so that extra 0.15mm really doesn’t bother me. Moving on, the iPhone 5 is 4.87 inches in length and Nexus 4 measures in at 5.27 inch which is reasonable for the device with a 4.7 inch screen. 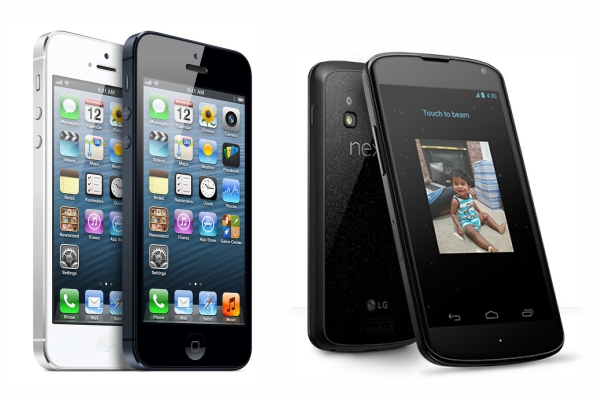 iPhone 5 is light and nimble, weighing only 3.95 ounces, you can barely feel it in your pocket which makes it a little easier to manage, but again, as I said before, its good to have a feeling that you are carrying something rather than forgetting about it. On contrast, the Nexus 4 weighs 4.9 ounce, still light and almost the same weight as Galaxy Nexus.

iDevices are notoriously fast thanks to their well scripted Operating system, a dual core 1 GHz processor will perform better on an IDevice when compared head to head with a dual core android device, that is a fact, but what about Quad core?

Nexus 4 features a Quad core S4 processor, the same which Optimus G sported. Clocked at 1.5 GHz and boosted up by 2GB RAM, it seems to be the perfect choice with Adreno 320 GPU completing the specification list. But what about the iPhone? Well, Apple decided not to trust anyone and they redesigned their processor to make the A6 which is a dual core processor clocked at 1.2 GHz and boasts PowerVR MP3 GPU and 1Gig of RAM. So on paper, the Nexus 4 seems to be the faster and superior device, but we would have to wait on benchmarks to declare a winner here.

We discussed the prices of iPhone 5 and how it varied from region to region, sure, Google is going to face similar situation considering each country imposes a certain amount of tax, but the fact is that iPhone 5 from Apple (sim free) cost $780 for the basic 16Gig model whereas the basic 8GB Nexus 4 will cost you only $299, that is a whopping $480 price difference. I have been using Galaxy nexus for past 4 months and an iPhone 4s, and I have to admit iPhone does excel in finesse, but since jellybean came around, Nexus’s performance notched up an I ended up liking the android better, so I am looking forward to upgrade to Nexus 4 considering the price it is offered at.

Well, Apple fans won’t be too pleased but, even though the Nexus is made by LG I would still rest my money on it because it is cheaper and faster (at least on paper) than iPhone 5, plus, since it is a pure Google device I don’t have to worry about the updates so it’s a win-win.