Many people believe that 4th generation iPod Touch is a cut-down version of iPhone 4; not giving just the network support. However, there’s more difference between the two devices than just the network and location service. To start with, iPhone 4 has a 5 megapixel back camera for still image shoot while iPod Touch 4g has only 0.7 megapixel camera (VGA) for that. iPhone also has 256 MB more RAM than iPod Touch 4g and the technology of their touchscreen is not the same. In the table below, I’ll only mention the differences between the two devices to get a clear picture of them. 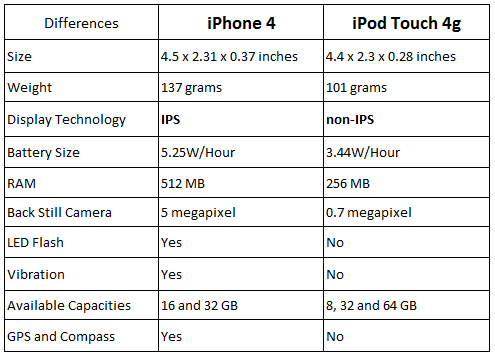 You get to lose color-strength and contrast as you tilt iPod Touch up to a certain angle. However, don’t take that the wrong way, we are just comparing it with iPhone 4, which also happens to be at least twice as expensive as iPod Touch 4g. If you’ve used the 3rd generation of iPod Touch, you’ll certainly appreciate more colors and resolution in the latest model. Thanks nexus 404.