Acer has announced their line of Tablets yesterday, one of them is 10.1 inch Android Tablet, that may give hard time to Apple iPad. However, the shipping date for Acer’s tablet is April, 2011 by which time we can expect an iPad’s improvement by Apple. On screen size an resolution, Acer tablet beats iPad by a little margin however the real deal is front facing HD camera an 5 megapixel rear camera on Acer tablet. Android 3.0 running on Nvidia Tegra II SOC (system on chip) makes Acer Tablet a real beast and super fast. Here’s a quick comparison between Apple iPad and Acer 10 inch Tablet. 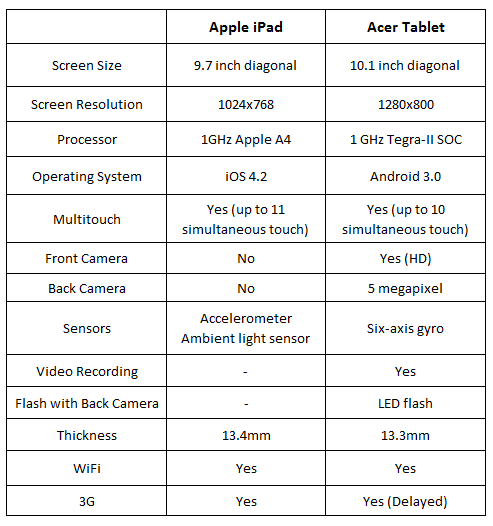 Acer has announced that the WiFi only version will be shipped in April, 2011 while you have to wait one more month for the 3G version of the tablet. (definitely following iPad’s model). In the press conference Acer affirmed the figures that 19 million tablets were sold in year 2010 and 55 millions units are expected to be sold in year 2011. Up to 200 million tablets sales are expected in year 2014, the reason for Acer entering into Tablet market.