As soon as the news about iPad mini hit the internet, there was only one question in mind, the pricing. iPad mini is set to target the 7” left out zone in the market, although dubbed as “King of tablets” iPad has nothing to worry about, but the recent stint from Google i.e. Nexus 7 left a lasting impression and Apple deemed that they could get rid of the competition all together.

As we have mentioned that ipad is set to fill the void left out by its other devices, all other variants like iPhone and ipod cover all the price regions, while iPad is the only device offered that is limited to full size and specifications. Although the device announcement was due to take place on 17th October but some urgent design changes pushed it ahead. According to the leaked sources, there will be several versions for the iPad mini varying in capacity and connectivity options. The most basic model will be Wi-Fi only and will boast 8GB of memory and a front facing camera, the speculated price of the basic model would allegedly be $249.

So, $249, that is $50 more than the Nexus 7 and the news gets more worrying as we go ahead. The heavier model boasting 16 GB of memory will cost you $349 that’s $100 more than 8Gb model and $100 more than Nexus 7, furthermore, the prices go up to $649 which makes us wonder if Apple are targeting the right market by releasing a basic device at such high rates. Is apple taking the right road? While Google is planning to release a $99 tablet, Apple can’t seem to control their price tag. 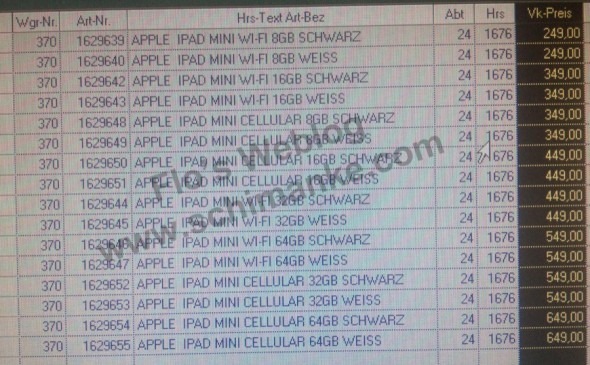 Instead of proving a cheap alternative, Apple is taking an opposite turn and producing rather costly devices, and that too with the famous retina displays. Is this worth the gamble? Are Apple going to succeed in taking over the 7” tablet zone? We don’t have to wait long, if the rumors are true we will see the device getting announced by October 27th.