HTC ONE X+ and 8X leak Specifications inside

Information about the upcoming windows 8 phone from HTC has leaked online on an page. HTC event is set to take place on September 19th and they are expected to announce their very first WP8 device – along with a few android devices, one of which could be the HTC ONE X+ which would be an updated version of One X. Information about the hardware has also leaked and the phones look impressive. 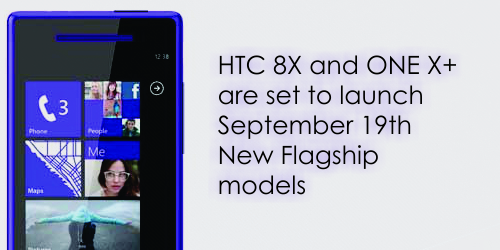 First up leading the WP8 department would be the HTC 8X, a dual core phone with a beautiful 4.3″ screen and 1GB of RAM would be a Krait based phone. Krait processors are well known for their power efficiency and optimized performance. Along with that, the 8X will have 16GB of on board storage and 8 megapixel camera having capeabilaties to record videos at 1080p resolution. Along with that – it would be the first WP8 device to feature beats audio a brand tag HTC chose a year ago. NFX will also be on-board the 28mm wide phone.
Next announcement was the ONE X+ the ONE X on steroids as i would like to call it. It would be the first HTC device to run jellybean (officialy) and will boast a Quad core tegra 3 AP37 chip colcked at 1.6 GHz. 1GB RAM and 32GB internal storage will further spice up the specifications. HTC SENSE UI 4.5 is expected to run on the subjected phone – which according to rumors will sport a 5″ screen.
That’s pretty much it from the two devices, lets hope they create a good buzz as the original ONE X did – HTC could really use the hype to their advantage. Following are few important technical specifications of the devices:

Both phones are introducing new OS to their lines, jellybean being the front runner in the android zone, while Microsoft just turn WP8 out, only time will tell if they can help HTC get out of the bad luck they are running in lately.