HTC held an event yesterday, announcing two windows phone 8 devices Windows Phone 8X and 8S, thee 8X is the more powerful one whilst the 8S freshens up the line for budget devices. We are sure that Windows phone will finally make a major impact this time around, so it is good to have clear options. Let compare the specifications and different aspects of the devices head to head.

Let’s start with design as usual. The Lumia 920 has a solid polycarbonate design enclosed in a candy colored shell, the back is glossy and has a traditional black bezel that holds the camera, a 8 megapixel camera with pure view, along with that an LED flash for those at night shots.

HTC on the other hand has a matt finish again enclosed in vibrant colored shells, the phone looks awfully like the Lumia series – they have moved from their traditional designs to the matt finished candy colored designs. On the front there are no physical buttons, camera on the top, volume rockers on the side and headphone jack on the top.

Nokia Lumia has a 4.5” screen with full 1280p resolution and an amazing pixel density of 332, as far as protection goes – the screen is covered by a corning gorilla glass. On the front we have a camera, and no physical buttons, however there are capacitive touch buttons for navigation.

Now, the brand new HTC 8X has a 4.3 inch screen with full 1280p HD display, the next thing is the most whopping part, a pixel density of 342 ppi, that’s right – that’s the highest among all the WP8 devices that we have seen, and even among the androids.

Camera on the Lumia 920 is an 8 megapixel shooter with Nokia pureView technology which they have only used in PureView 808 before. On the front you will get a 1.3 megapixel camera for video calls.

HTC on the other hand boasts an 8 Megapixel camera as well with resolution of 3264 x 2448 pixels, autofocus, 28mm wide, F2.0, LED flash and can record videos at 30 fps at 1080p, a front 1.3 megapixel camera completes the camera specifications.

Both Nokia Lumia 920 and HTC 8X share the Qualcomm MSM8960 chipset with adreno 225 GPU, adreno produces good benchmark results and give tough competition. The dual core 1.5 GHz krait processors are notoriously fast, windows phone does not take a lot of memory and a Dual core processor is perfectly sufficient to run windows phone.

Here is a look at technical specifications of the subject devices. 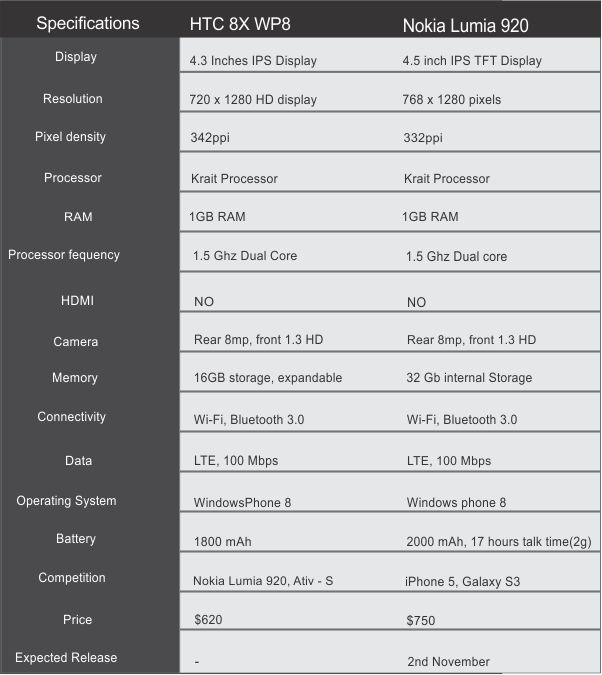 Nokia’s CEO tweeted that they have no threat from HTC and that matching the colors wont match the innovation that is in Nokia Lumia 920, however the huge price difference, a better screen and a better design might put it in the favor of HTC. Both phones are yet to be released and only then we will know for sure which phone has the upper hand.