Windows 8 brought major changes, one of them being the introduction to tile based start-up to put it in simple word – windows 8 UI. The fact that Microsoft removed the “Start” button from the desktop caused a stir among the users of Windows. Several tools were released by developers to bring the start button back – which was countered back by Microsoft. The problem being that users have been used to the start button since very first edition of GUI based windows. It is now bothering the performance and efficiency of the users i.e. the removal of start button. 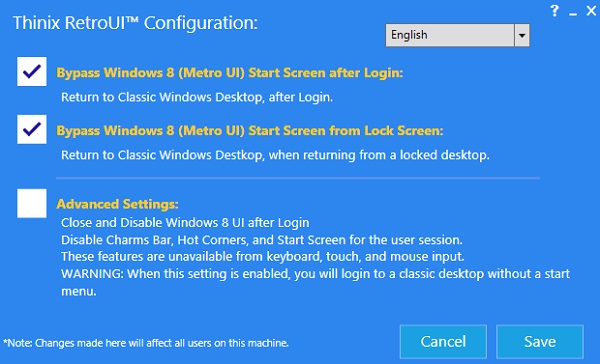 Now however, there is a new tool in town. Retro UI promises to bring your “Old look” back, you will be able to use the old method to browse around with comfort. Here we are going to show you how to use Retro UI. Download Retro UI from the Link (found at the end of the post), install it like another windows Application- then , open up the application and you will be welcomed with several options. See screenshot below (courtesy CNET).

There are two main options, first to remove the Windows 8-UI after you log in, second option to remove the UI from the lock screen, this gives added freedom to the user. Advance options will give you further extensibility, giving you the options to remove or disable corner hot screens – which appear when you take the mouse pointer to the corners of the screen which although are handy and makes navigation easy – but can be annoying to novice windows 8 users.

Retro UI will cost you $5, but you can start it up with a fully function 14 day trial, after which it will no longer work. It is currently the simplest way to tackle with Windows 8 UI, if you are unhappy with the interface and need to go back then this is the best option yet.