How can a virus damage the hardware

Virus can easily corrupt the software and you probably have to reinstall the driver in question or the whole operating system, not to mention the data it can erase. There’s been much debate on whether a virus can damage your hardware or not. I say, with 100% certainty that it can. That doesn’t mean that every virus is capable of doing it, but a virus is capable of damaging hardware like hard drive, DVD drive, processor, motherboard, etc.

How does a virus damage the hardware

1. Carrying a certain action many times like writing-rewriting on hard drive millions of time to generate bad cluster in it.

2. Controlling the speeds like slowing down the processor’s fan speed while overclocking the processor to burn it.

3. Erase the firmware of devices and BIOS of motherboard.

4. A virus can control the graphics and send abnormal signals to the LCD monitor damaging it permanently.

A virus specially designed to perform a special malfunction in hardware without being detected by any anti virus can do a damage of millions before being detected. History is full of such examples. 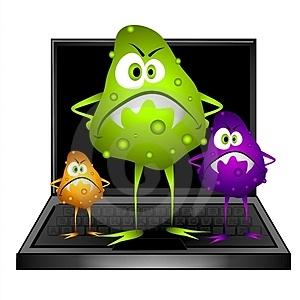 Viruses that actually damaged the hardware

I have compiled some examples from the past where a virus damaged the hardware directly or indirectly. Motherboards, drivers and OS are smarter and efficient nowadays, but so do the viruses. The evolution of good mind and bad mind is parallel, while the good minds design anti virus, OS, hardware and software, the bad mind developed the virus to destroy them.

In 1998, Chen Ing Hau of Taiwan devised a virus that was later coined with the name: Chernobyl. The virus he wrote wasn’t meant to infect systems, but somehow leaked and became one of the most harmful widely circulated viruses. While performing many other damaging acts, it actually erased BIOS from many computers. Computers that had motherboards based on the Intel 430TX chipset were the most vulnerable to it. The remedy was to buy the new BIOS chip but most people bought new motherboard due to lack of knowledge.

Kriz or W32.Kriz was discovered a year after Chernobyl virus and uses the same methods of effecting the hardware. Many believed that it was an extension of Chernobyl. Kriz was capable of overwriting data on the floppy, hard drive and RAM and erasing data from BIOS.

Magistr was unleashed into the world in year 2001. The virus was capable of deleting all the data from BIOS and hard drive. Like most other viruses it also spreads from email, it searches the address book of infected computer and sends an mail to list infected with it. Magistr can sit in your computer silently without letting anyone know and releases its wrath suddenly, deleting all your data from hard drive and/or BIOS.

These were some of the famous examples about which there exist no doubt that they damaged hardware. But often users report hardware malfunction due to virus attack so there are millions of hidden viruses that can do serious damage to the hardware mostly to CD/DVD drives. The only way out is to use a good and updated antivirus.