Having trouble with built in storage on your Android/iOS device, Kingston gives you a solution

As the device’s are getting bigger and more advanced, their internal storage is shrinking. That mainly has to do with manufacturer’s who for some reason hate to give extended memory option. Take Nexus devices for instance, they have massively beautiful screens boosting great number of pixels and good cameras; iPhones, again the same story, great screens great cameras less memory. The reason why i mentioned camera’s and display’s is that the better they are the more space the files would take. We did bring you a solution though, Patriot Wifi drive, if it did not inspire you that much then you have an alternative, the Kingston Wi Drive. 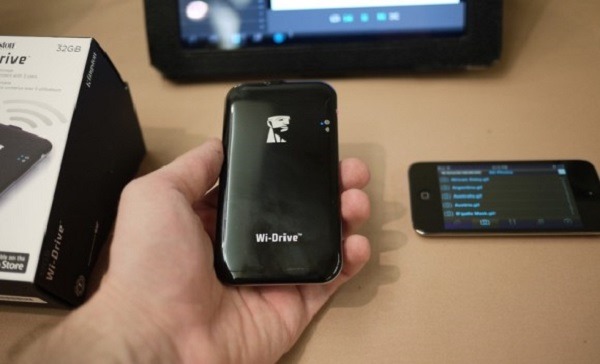 Kingston’s recent Wi-Drive expands the measly storage by providing external wireless storage solution that communicates with your device via a wireless connection. It is a perfect solution for those who wish to store large files but are restricted by the memory option on their Smartphone’s, and if the 64Gb option wasn’t enough for you then Kingston has released a 128 GB version as well which will get you a long way.

The memory does not come in cheap though, since they are based on SSD Nand memory, the same you get as your phone’s internal memory, they are son the expensive side. The latest model is priced at a hefty $273 at Kingston, but, if you get it from amazon you will save a lot, at $176 + shipping, it is nearly a $100 cheaper than from Kingston. As the 64 GB model cost’s around $110, the 128GB option seems to be a better choice.

Kingston suggests that expanding the memory will not effect the battery time offered, at 4 hours per charge, you can do a lot. The Wi-Drive is very portable as well, at the size of the Smartphone, you can easily carry it around in your pocket. The best thing about the drives however, is it’s looks, the drive looks like iPhone 3gs and iPhone 3g minus the screen. So, at $173, 128GB and Wifi drive, the package seems perfect and i for one would love to have one.