Hate low volume on the impressive iPad? Try this accessory

iPad is without a doubt an amazing gadget. That is the reason for its massively impressive sale records and why is it on top of our wishlist. The powerful processor and the amazing screen are just the highlighting features, if you dig deep, you will see what iPad is truly capable of. Every gadget receives it’s fair share of criticism, for iPad, the news is no different. Despite it’s over achievements in performance, the lacking hardware like the speakers always put a dent on its reputation and it always made me think, how hard is it to provide a surround sound speaker module with the iPad.

Well, it’s not Apple who has come up with an answer, but it is a start-up company named Objekt, Inc. who show off their latest gadget the ORA. ORA is designed to enhance your audio experience on the iPad, it will work like a dock but attached with your iPad like a casing. The design, as you can see from the images below is nothing short of ‘amazing’, the mesh speakers ooze out awesomeness and by no means it looks like an accessory but a part of iPad itself. 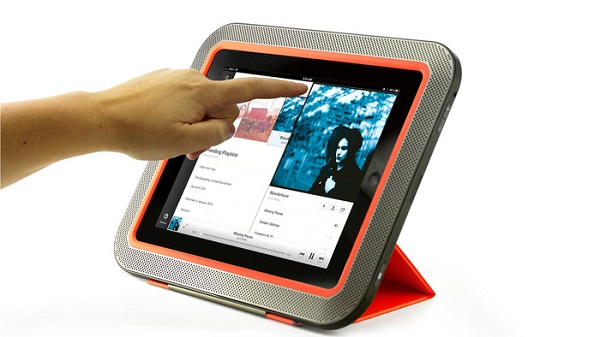 ORA uses an amplifier and eight, front facing speakers to boost up you experience. Not only does it packs power, it is more technically accurate, while the speakers on the iPad are vented away from the users, the ORA directs the amplified sound towards the user. So, watching movies, playing games or chatting with friends and family on Skype would be that much easier with ORA.

Though the speakers might increase the surface area of the iPad, but I wouldn’t mind to have it wrapped around my iPad, simply because it looks absolutely beautiful. What’s better is that you can still use it as a cover, because ORA is designed and adapted to use the smart-cover technology and thus you can stand it up for normal use. Since the speakers are on the longer edges of the iPad (when in landscape mode) your hands wont block out the sound coming from them. Watch the video of ORA in action below:

Sadly though, the design isn’t really in production as it is a start-up project funded by kickstarter. But, if you want to back this project you can fund it with $99 which will get you the ORA as well, which will eventually sell for $199.